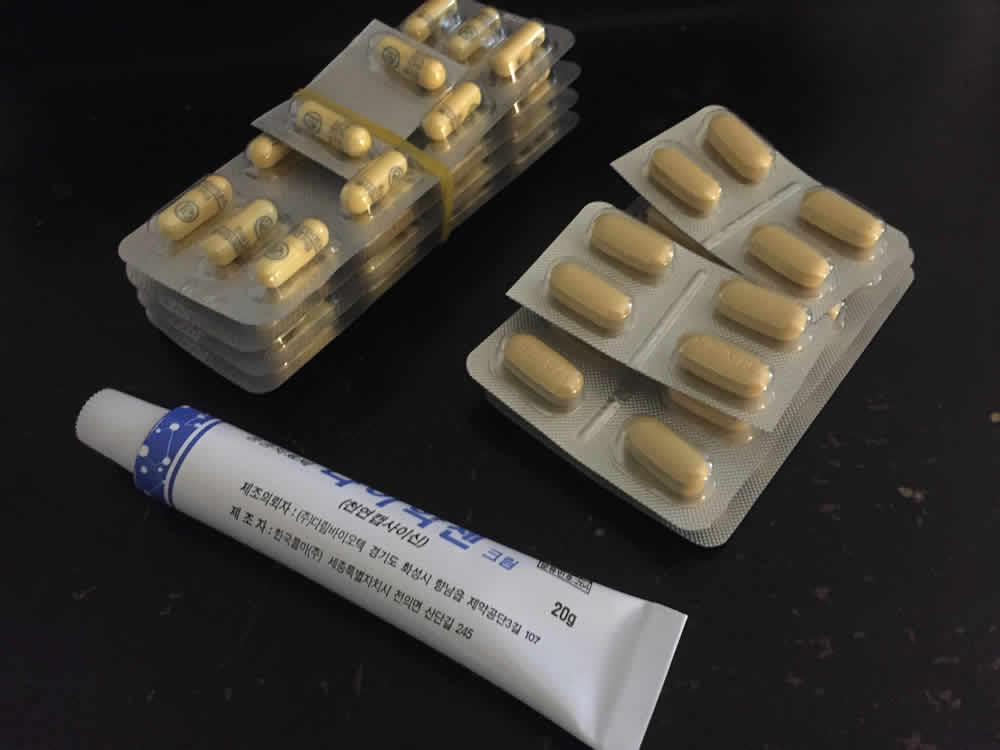 Right around the same time that I found out that I have type 2 diabetes, I was experiencing some pain in my left shoulder. It was kind of a dull ache. I also had a small patch of bumps developing on my left palm between the thumb and forefinger. And there were also red splotches developing on my left forearm. Oh, and don’t forget over-sensitive skin. Just holding my phone for more than a few minutes becomes painful.

I described the pain and the hand bumps to the doctor who had just told me that I was probably diabetic (I hadn’t seen the red splotches yet). His response was to tell me to see a neurologist. I went to one the very next day because my pain seemed to be getting more serious.

Because I also had a faint ache in my chest, the neurologist sent me to Samsung Medical Center, one of Seoul’s “big” hospitals, where they did 1,000 different tests on my heart. They thought my chest ache and arm pain was a cardiac problem.

By the next day after my hospital visit (Sunday), my shoulder was REALLY hurting. It was still a dull ache, but it was really strong and unpleasant. The bumpiness on my palm was also growing.

On Monday I went to a “family doctor” near my home. His office is kind of a dump, so let’s call him Dr. Dump. Dr. Dump diagnosed me with “herpes juche.” I think juche is a Korean word. Or maybe he was saying a Koreanized version of “herpes zoster.” Anyway, apparently it’s a condition that is common in diabetics.

He prescribed some antiviral medications that I took for a week. That stopped my hand from getting bumpier and the red splotches went away. The pain seemed to go down a bit, but it was still very present.

Now at this point, Dr. Dump is also treating me for diabetes. His location is just really convenient, and he diagnosed my arm pain after two other doctors failed to do so.

So after finishing 7 days of the medicine Dr. Dump prescribed, I went back to him. The antivirals seemed to have done their job and the bumps and splotches were going away. But I told him that I was still in pain. He said “it’ll get better” and proceeded to change the subject to my diabetes medication (I’m taking Metformin). Umm. Ok.

Maybe Dr. Dump was fine with me being in pain, but I wasn’t. So then I went to yet another doctor at Seoul Asan Medical Center. This place is also a “big” Seoul hospital, but this time I wasn’t there as an emergency room patient.

They have a “family medicine” clinic within the hospital. That doctor, a young lady who looks like she’s just out of high school (let’s call her Teen Doctor), diagnosed my arm pain as postherpetic neuralgia. I guess that’s a pretty similar diagnosis to herpes juche.

So Teen Doctor, the fourth doctor I’ve seen at this point, finally gave me some drugs. She gave me a week’s worth of Neurontin. I dunno what Neurontin is, but I’ll take it. Small dosage at first, and I worked up to 900 mg per day (300 mg x 3).

Just today I went back to Teen Doctor. I explained that my arm pain has improved quite a bit, but only during the day. I can function at work. My arm still hurts a little, my skin is still sensitive, but it’s very bearable.

BUT … nights suck. The arm pain starts to get worse when I lie down in bed. My hand being in contact with the blanket on my bed is uncomfortable after a few minutes. And the pain seems to get worse over the course of the night, so when I wake up I’m really hurting. My entire arm hurts pretty badly.

Teen Doctor listened to me and gave me 2 more weeks of Neurontin for day-to-day pain (I guess it’s a painkiller specifically for nerve pain?). She also gave me Ultracet ER which is a mix of 650 mg Acetaminophen and 75 mg of Tramadol. The Ultracet is to be taken when I go to bed and again when I wake up. And she threw in a cream called Diaxen which is also supposed to help with the pain. Nice.

Tramadol, it turns out, is serious stuff. WebMD says it’s similar to an opioid. You can overdose on Tramadol and die. Awesome!! But my dosage is low, so I’m not too worried about addiction or overdosing.

Anyway, I’m happy that a doctor is finally listening to me and helping me with this postherpetic neuralgia pain. Google seems to indicate that it’s something I just have to deal with until it goes away, and Teen Doctor is helping me deal with it.

Thank you, Teen Doctor. You may be young, but three other doctors either couldn’t or wouldn’t address my problem. I can handle gout, I can handle diabetes, but I can’t handle constant pain. And it kind of pisses me off that the first three doctors didn’t take my pain seriously.

Here are the translations for the antiviral prescription I got from Dr. Dump.

Famciclovir is a guanosine analogue antiviral drug used for the treatment of various herpesvirus infections, most commonly for herpes zoster.

Dexibuprofen is a nonsteroidal anti-inflammatory drug.

Methylprednisolone is a corticosteroid (cortisone-like medicine or steroid). It works on the immune system to help relieve swelling, redness, itching, and allergic reactions.

Nizatidine is used to treat ulcers of the stomach and intestines and prevent them from coming back after they have healed. This medication is also used to treat certain stomach and throat (esophagus) problems (such as erosive esophagitis, gastroesophageal reflux disease-GERD). It works by decreasing the amount of acid your stomach makes.

It can prevent stomach ulcers caused by anti-inflammatories (NSAIDs).