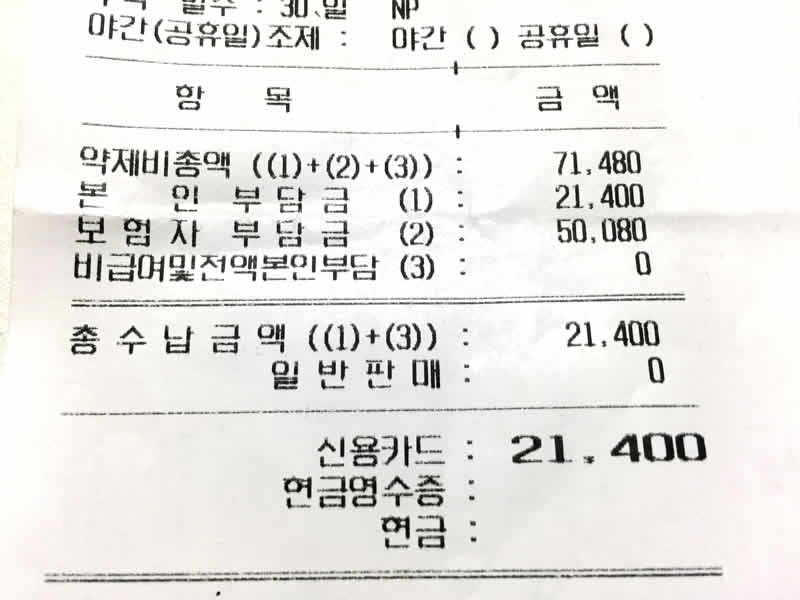 I don’t know how helpful this is to people outside of South Korea, but it might be interesting just for comparison’s sake.

South Korea has a national health plan. Yes, “universal healthcare.” “Socialized medicine.” When I got my current job (and all previous jobs as well), I was automatically enrolled in the national health insurance plan.

Out of my gross pay, my health insurance costs me roughly 3.4%. Wikipedia says that the rate for employed people is about 5%, but my salary is calculated in a weird way so it comes out to a lower rate. Hooray.

So, based on a rate of 5% here’s an example of cost: If your gross income is $5,000 per month, your insurance cost would be $250 per month. Does that cost change if you have dependents? I don’t know. Probably.

And another thing I’m not sure of is whether my employer is subsidizing some of the cost of my health insurance. Wild guess, they probably are.

I currently go to three different doctors for various purposes.

The “family doctor” around the corner from my home, a.k.a. Dr. Dump (because his medical office is a dump), is a place I go to mainly out of convenience. Dr. Dump prescribes me Metformin (known in Korea as Glucodown) for diabetes and Allopurinol for gout.

His office may be a dump, and my nickname for him may be unflattering, but he seems to know the stuff that doctors are supposed to know. He did, for example, look at my “herpes zoster” (roughly the same as shingles, which led to my postherpetic neuralgia). He automatically put me on antiviral meds to stop it. Cool. So I trust him to help me manage my diabetes and gout.

He charges me about ₩4,500 per visit. That’s about US$3.80. And of course, that’s the rate I pay with my national health insurance.

I also go to a “big hospital” (as opposed to a medical clinic, which is also referred to as a hospital in Korea). I go to the big hospital to see Teen Doctor (she looks like a teenager) who prescribes me the medication that keeps my postherpetic neuralgia pain in check. I go to her because Dr. Dump basically ignored me when I told him I was hurting. His response was “eh, it’ll get better.”

My visit with Teen Doctor today cost me ₩20,100, or US$16.90. The hospital is state-of-the-art with departments for every major medical specialty in the universe, so I guess it makes sense that going there will be more costly than seeing the dude down the street.

On a side note, needing medical attention on a weekend is a relatively expensive proposition in Korea. If you have to go to a hospital on a weekend, you’re going to the emergency room. That visit, even with national insurance, will probably cost at least US$90+. Maybe that’s cheap by American standards … I guess it depends on your insurance plan … but it’s a far cry from paying less than $20.

The third doctor I go to is at the Eastern medicine clinic (한의원) where they treat me with acupuncture, suction cups, etc. to further reduce my pain from the shingles/postherpetic neuralgia.

I don’t have a nickname for this doctor yet. Therefore, I now dub her … Dr. Mom. She’s probably around my age (late 40s), but she seems to like giving me medical advice in a vaguely mom-like way. In other words, she shows genuine concern for how I’m taking care of myself, but there’s always a hint of gentle scolding when we talk about my diet, what kinds of booze I drink, and how many pain pills I’m popping. Man, I sound like a mess! No wonder she’s worried.

First of all, on the question of how much insulin costs in Korea: As a type 2 diabetic, I don’t take insulin. Well, at least not as of right now. I will address the cost of insulin in Korea in a separate post, but suffice it to say that it’s DIRT CHEAP compared to America. That’s what my type 1 diabetic coworker tells me, anyway.

And now let’s see what other medications cost, based on the several prescriptions I’ve had filled recently.

Below is a picture of the pharmacy receipt which shows how much help I got from my national insurance coverage to pay for it.

So, is treating diabetes in Korea affordable?

YES. It’s an expense, but so far it hasn’t been a huge expense for me. And it certainly helps that insulin, which I don’t take at the moment, is apparently very affordable as well. I don’t know what it costs in America, but I did recently read that Colorado has capped the cost of insulin at $100/month or something. Just the fact that it’s being legislated tells me that the cost is probably a huge problem elsewhere.

I’m not crazy about being diabetic, but at least it’s manageable and the costs aren’t too high. Seeing Dr. Dump is cheap. Metformin is cheap. Seeing Dr. Mom is pretty cheap, but 5-6 visits per week is gonna add up in the long run.

My biggest expenses so far are seeing Teen Doctor and buying the medicine to manage the wonderful nerve pain I get from postherpetic neuralgia. Those costs aren’t strictly diabetes-related, but Google tells me that this condition is common in diabetics. So I guess diabetes is indirectly responsible for my need to see Teen Doctor.

How does the healthcare system in Korea compare to America?

I dunno, you tell me!

I follow U.S. politics pretty closely, so I’m well aware of the ongoing battles over Obamacare, pre-existing conditions, etc. I’m sure the Korean healthcare system has its downsides, but for the people I know, it seems to work really well.

Feel free to scroll down and comment if you feel so inclined.

This is how I keep my A1C low!
Postherpetic neuralgia sucks
Two things I have a lot of: pills and triglycerides