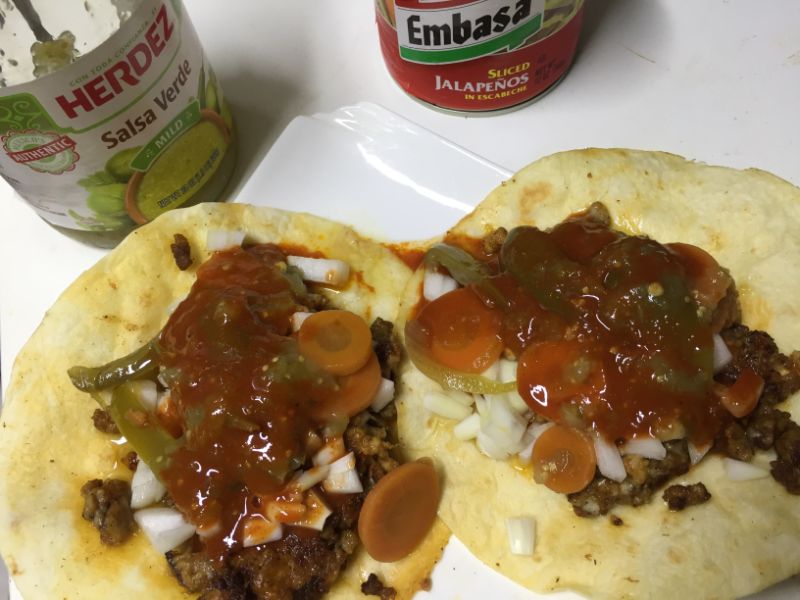 I say this recipe is “somewhat” diabetes-friendly because it’s tacos, and tacos are eaten on tortillas. The good news is that you can choose tortillas that are easier on the diabetes than others.

Since I live in Korea and have pretty limited choices when it comes to tortillas, I buy really thin 6-inch tortillas that only weigh 20 grams each. If you can’t find those, you can get low-carb whole wheat tortillas from La Tortilla Factory and Mission. There are others, but you can hunt them down on your own.

I can’t tell you how diabetes-friendly these tortillas really are, but they’re almost certainly a better choice than eating the tortillas that non-diabetics would probably buy.

So, let’s make some tacos. Like my tofu stir-fry, this thing that I’m loosely referring to as a recipe is dead simple.

Cook the meat and add your seasoning. I usually add seasoning near the end of cooking, but maybe you do it differently. Anyway, mix up the meat and seasoning until it’s evenly distributed.

If you’re using the three powders I suggested above (chili/onion/cumin), there’s no trick to how much you put in. Just eyeball it! This isn’t Hell’s Kitchen. Do whatever you want. Honestly, it’s pretty hard to screw up.

Dice some onion while the meat is cooking.

When the meat is cooked and seasoned, separate the amount you need for your tacos and put some cheese on it. You could put the meat and cheese on the tortillas separately, but I like to melt the cheese right into the meat.

You’ll need to toss the meat and cheese together so that it gets all blended and melty.

Heat the tortillas in your pan. First heat them a bit on one side, then flip them over and toss your meat-n-cheese on top.

Be careful not to burn the tortillas or they’ll crack when you try to fold them, and then you will be very dismayed.

Blood sugar before and after!

This was dinnertime and I hadn’t eaten in a while, so I have no idea why my blood sugar was so high. Maybe I ate something and just forgot about it?

This reading was about 90 minutes after I finished eating my two tacos. The tacos weighed about 110 grams each, which is to say that they were pretty well loaded.

171 → 204 is pretty small as far as the blood sugar increase goes. I usually check blood sugar about 1 hour after eating, so maybe it had already peaked and was on the way back down after 90 minutes.

This reading was also dinner, and 104 is a pretty normal starting point for me at this time of day.

These two tacos had even more meat and cheese than in reading #1. I think they weighed about 130 grams each because it was the last of the meat and I wanted to use it all up.

In conclusion, I will continue to eat tacos. It’s not as easy on the blood sugar as other things I eat (like spicy Korean pork), but goddammit! I want tacos. If I only eat two at a time, I think it’s safe.