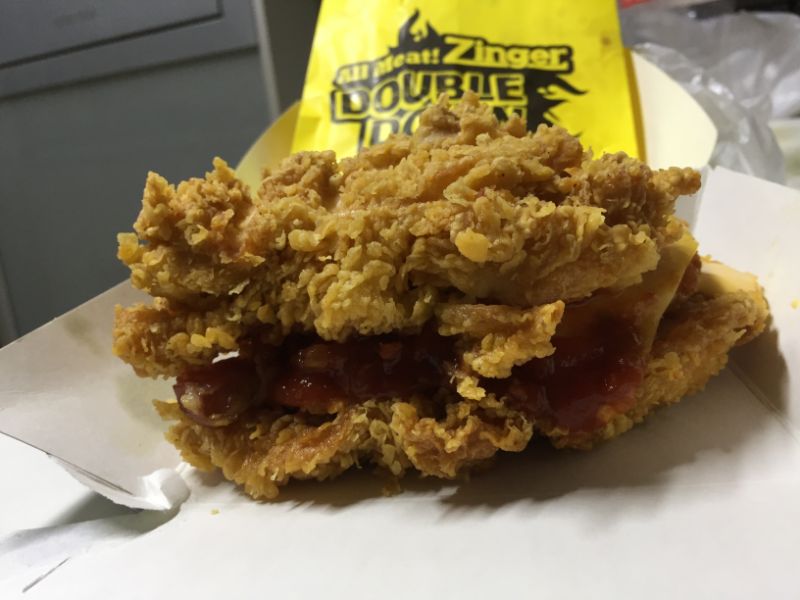 A while back, I declared KFC safe to eat. That was when I was eating only fried chicken, and yeah it’s easy to see why that would be safe.

The KFC Double Down, however, is a completely different thing. It’s got cheese, BBQ sauce, bacon, and a damn HASH BROWN stuck in the middle of two hunks of chicken!

This thing is unhealthy no matter who you are, but if you have GODDAM DIABETES, it’s especially bad. You would think the absence of bread makes it safe, but (probably) the hash brown ruins the whole thing.

This reading of 88 was on a Saturday evening. My first meal of the day because I have bizarre weekend sleeping habits.

I ate the whole thing, hash brown and all, and this is the result. Not good! But you know, sometimes these tests can give weird results. So, in the name of science, I ate another Double Down.

This reading of 92 was on a Saturday evening several weeks later, just like my first Double Down.

So … sonofabitch! This result is basically the same as the last one. Double Down, bad.

But what if you take the hash brown out of the equation? Hmm. This sounds like another scientific experiment that requires exploration.

UPDATE! I actually did get a Double Down *without* the hash brown, and it was MUCH better on the blood sugar:

This reading of 92 was on a Saturday afternoon. I don’t think I had eaten anything yet.

This reading was about an hour after I finished my KFC Double Down sans hash brown.

So yes, the hash brown seems to be the culprit here. And if you take that out of this, uh, “sandwich,” what you’re left with is two big hunks of fried chicken with some cheese, bacon, and a bit of sauce in the middle.

It’s still really, really unhealthy, but getting rid of the hash brown certainly helps to make it less terrible for you.