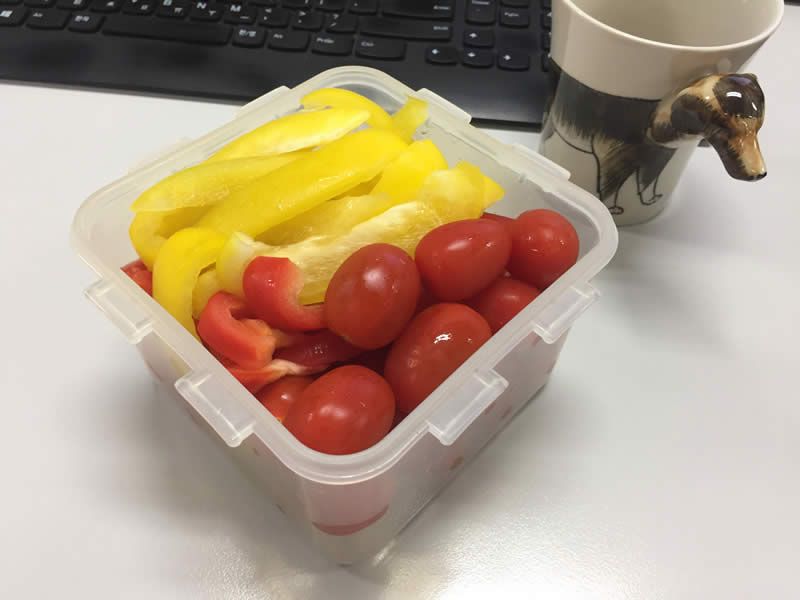 Basically every day at work, I sit down at my desk with a small Tupperware thing full of veggies for breakfast. Those veggies are usually cherry tomatoes and cucumber spears. Sometimes I throw in a little chunk of pepper jack or colby jack cheese when I’m feeling crazy.

Today, however, I did the unthinkable: I put TWO chopped up bell peppers in my Tupperware thingy. One was red, the other was yellow. I also had some cherry tomatoes in there. Seems pretty innocent, right?

But maybe I should have expected it? According to some website called Healthline:

Bell peppers are primarily composed of carbs, which account for most of their calorie content — with 3.5 ounces (100 grams) holding 6 grams of carbs.

The carbs are mostly sugars — such as glucose and fructose — which are responsible for the sweet taste of ripe bell peppers.

Even so, the post-bell-pepper blood sugar number I got was pretty outrageous.

This reading of 116 was in the morning when I got to work. I had not popped my daily dose of Metformin yet.

This reading was about an hour after I finished the bell peppers and cherry tomatoes.

I was obviously a bit alarmed by this, so I immediately took my Metformin and checked my blood sugar again about 40 minutes later. My Accuchek Performa said I was at 110.

So I dunno what’s really going on here. Does Metformin really work THAT fast? Or is it possible that the 340 was a bad reading?

Something kind of weird did happen when I got the 340. I had touched the test strip to my finger and got some blood on it, but it wasn’t enough.

Usually when this happens, the test strip becomes unusable, but the Accuchek didn’t give me the typical not-enough-blood error message. I don’t think the blood got into the little pathway that goes up into the test strip, so maybe that’s why.

So I squeezed some more blood out of my finger and the test registered properly. That was when I saw 340 and I was like duuuuude no.

I probably should have re-tested to see if I would get a similar result, but I didn’t. I’m not sure that eating two more bell peppers is a great idea, but maybe I’ll try one and see what happens.

Tags: bell peppersBlood sugar before and afterfoods that are bad for diabetics