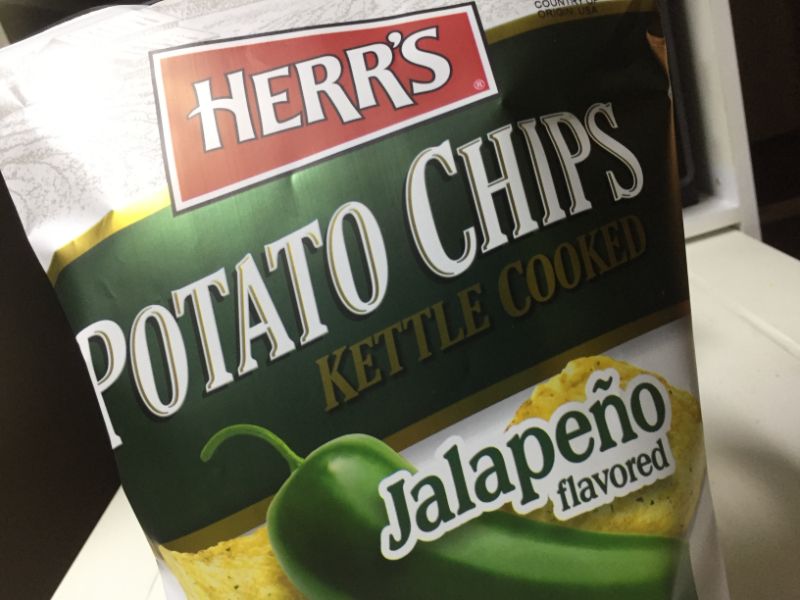 I’ve never been “into” snacks. I usually don’t sit around eating potato chips and other garbage while I watch TV, but I saw these chips and my first thought was gosh I wonder if diabetics can eat potato chips?!

Since carbs are bad, and potatoes are just lumps of carbs, diabetics generally should stay away. But potato chips are so thin! How bad could they be? I mean, yeah they contain a stupid amount of sodium, but some chips won’t kill my blood sugar … right?

Also, I just wanted these chips. Just because I don’t eat a lot of snack foods doesn’t mean I don’t want them from time to time. I love kettle chips, and jalapeno flavor? Umm yeah. Gimme. Now.

So I bought the bag and measured out about 50g of potato chips. This number was arbitrary. I just poured out a pile of chips that I thought of as “satisfying” but not outrageously excessive. Considering that the whole bag was only 170g total weight, 50g was actually kind of a lot.

50g of potato chips was almost one-third of the bag. And those small bags of potato chips that you get from vending machines? Those are about 28g each. So eating 50g of chips is almost like eating two of those little snack bags.

This reading of 108 was after work, several hours after lunch.

The 134 was about an hour after eating my 50g of potato chips. During that hour, I was out walking Terry.

So 108 → 134 is definitely not a big deal! To eat the equivalent of two snack-size bags of chips and get an increase of just 26 mg/dL was really encouraging.

And then about 30 minutes after the 134 reading, I decided to eat a couple of tacos for dinner. So I made the tacos and, before eating them, I checked my blood sugar again.

I had eaten nothing during the 30 minutes that passed between the 134 and the 205.

Had I not checked my blood sugar again, I would have falsely believed that eating 50g of chips was basically harmless. But I guess I needed another half hour for those chips to really do their thing on my glucose.

Is it normal for my blood sugar to creep up a little for an hour and then suddenly shoot up over the next half an hour? Dang. I dunno! I suppose it’s possible that my walking during that hour kept my blood sugar down.

I’ve been in the habit of checking blood sugar one hour after eating, but I guess now I’ll have to start doing checks at 60 minutes and again at 90 minutes. That might tell me something about whether today’s potato chip adventure was just a fluke.

But for now, anyway, I think the verdict on potato chips is DO NOT EAT. Well, do not eat two small bags’ worth.

A smaller quantity is permissible, I’m sure. But you know what they say about Lay’s … you can’t eat just one! And I guess that applies to other brands, too.

Pizza sucks for diabetics. But not if you make the dough with almond flour!
Whoops, I just ate a big hunk o' salmon sashimi
That lil' quesadilla probably won't hurt you! But lose the tomato, por favor
Diabetes blood sugar before and after: Spicy Korean pork, again (제육)
Hail, Caesar! The salad, not the Greek dictator
Diabetes blood sugar before and after: Japanese/Korean food (tuna sashimi 참치회)