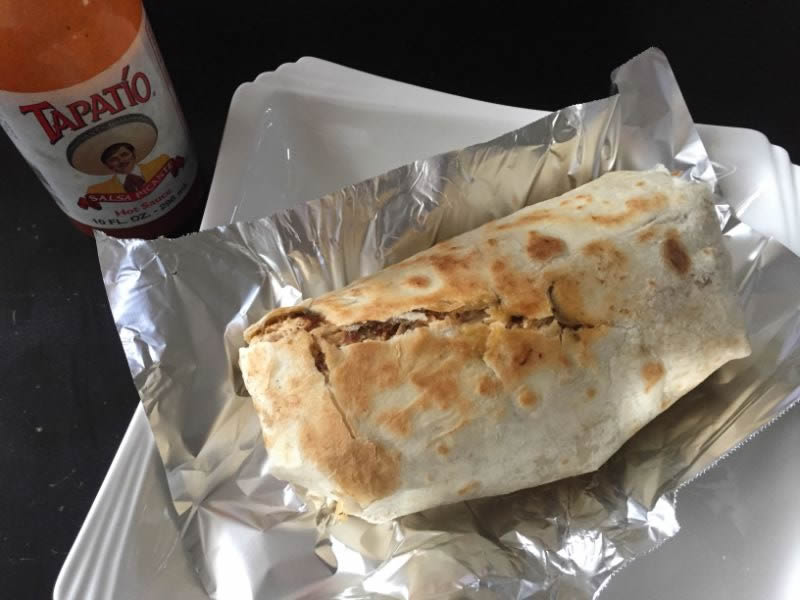 I’ve eaten a lot of burritos over the past year, but I should probably stop!

Tacos, you see, are just fine to eat if you have diabetes. Those small flour tortillas make it easy to control your carb intake, and hard shell tacos make it even easier. Burritos don’t really offer that convenience.

So far, I’ve only published one other burrito test, and it was a burrito I got from a restaurant. The blood sugar increase was pretty mild, especially considering I had also eaten a taco along with it.

I’ve also measured blood sugar before and after eating my homemade burritos, but I have yet to publish any of them because … I dunno, maybe I’m in denial! The results were displeasing.

But I’ve finally decided to face the not-so-bueno truth. Burritos that are wrapped in a gigantic tortilla are not a good choice for diabetics. And, unfortunately, most of the burrito places (mainly greasy-spoon taquerias) that I’ve seen in America use tortillas that could double as a table cloth.

This reading of 95 was soon after rolling out of bed on a Saturday afternoon.

This reading of 190 was about an hour after eating my big, fat burrito.

None of that stuff is really dangerous to the glucose levels. But the tortilla most certainly is. Look at the size of this damn burrito tortilla compared to a taco tortilla!

So an hour after finishing my burrito, I was at 190. But because my recent potato chip experiment showed a mild increase in the first hour and then **BAM** I was sky-high after another 30 minutes, I decided to make sure my blood sugar wasn’t going to go even higher.

OK, so … phew. I maxed out at 190 after one hour, and then my blood sugar started to go back down. Granted, I was walking Terry during this additional hour after the 190 reading, but I’m pretty sure that’s how it’s supposed work.

In conclusion, huge burritos on huge tortillas are not a good choice for the diabetes crowd. Sorry! I’m as disappointed as you are.