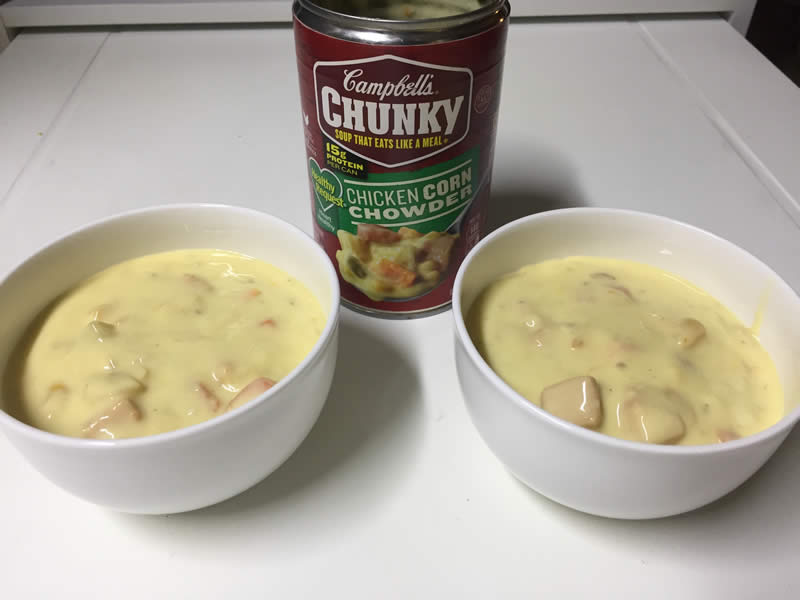 The nutrition info on this soup is pretty horrific. The whole can contains 47g of carbs and 7g of sugars! Eww. That’s a lot. For comparison, a can of condensed Chicken Noodle soup has only 20g of carbs and no sugar.

So I knew that eating this entire can was a bad idea. But I already had the damn soup from my pre-diabetes life, so I figured it would be OK to eat just half a can and save the rest for later.

This reading of 104 was after work, so I hadn’t really eaten anything since lunch.

This reading was about an hour after I finished the soup. During that hour, I went out for a short walk with Terry the Dog.

So this result is pretty terrible, mainly because I only ate half of the can of soup. 104 → 171 would be acceptable to me if I had eaten something more substantial, like a whole meal.

Now, Campbell’s Chunky Soup is the “soup that eats like a meal,” but not if it’s half a damn can!

I did a whole writeup on how Campbell’s soup is generally bad for diabetics, and this really confirms it. I’ll still eat the rest of the Campbell’s soup I have on hand, but the only ones I’ll probably keep eating in the future are Chicken Noodle and maybe Cream of Mushroom if I need it for cooking.

Sweetened soy milk is bad for diabetics ... right? Wrong! Probably!
Diabetes-friendly baked goods!
Yes, diabetics can eat cheese! Well, at least this one can.
Are strawberries safe for diabetics? Well ... yeah! Turns out they are
Diabetes + KFC = No problemo!
Diabetes blood sugar before and after: Japanese/Korean food (tuna sashimi 참치회)

Tags: Blood sugar before and afterCampbell's soupfoods that are bad for diabetics