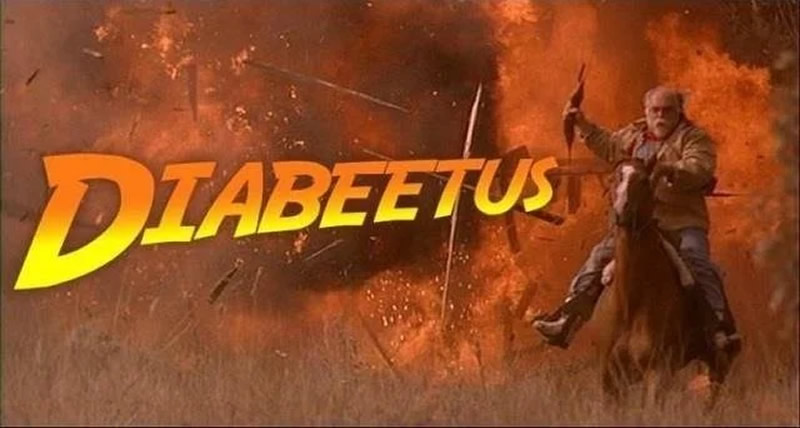 One year ago today, I got the wonderful news that I have goddam diabetes!

Nobody told me how to deal with it, except for the one lady at the hospital who told me to “eat tomatoes.” Great. Thanks, lady.

I’m writing this for new Type 2 diabetics who are still trying to figure out what they’re supposed to start doing differently. It’s really pretty simple, but this is the stuff I wish someone could have told me at the beginning.

If you have Type 1 diabetes, most of this still applies to you, but you have the added fun of injecting (or pumping) insulin. Sorry, I know basically nothing about that side of the ‘beetus.

You have diabetes, not cancer (but if you also have cancer, well … diabetes is probably the least of your problems). In my one year of being a Type 2 diabetic, I have found that diabetes is easily controlled through diet. There is truly no need to lose your mind.

Type 2 diabetes is bad, but it’s not going to kill you as long as you manage it.

Type 1 diabetes … well, THAT one can kill you if you have difficulties getting insulin. If you live in a place where insulin is outrageously expensive, you should seriously consider moving to a place where the price is regulated (I hear Colorado is nice this time of year). But yeah, I know … easier said than done. Sorry man.

Get a couple of blood sugar monitors.

Get a blood sugar monitor for home. Get one for work. Get another one to keep in your car if you do a lot of driving, or keep one in your backpack if you’re a student, etc. You get the idea.

Blood sugar monitors (also called blood glucose meters or glucometers) are practically free when you buy test strips. And I’ve heard that a lot of health insurance policies will pay for both monitors and test strips, so take advantage of that if you’re insured!

I’ve used three different brands (Accuchek, CareSens, and B|Braun), and they all seem to work in pretty much the same way. Any time I’ve doubted the results that one gave me, I checked with a different brand of blood sugar monitor, and the results were more or less the same.

So don’t obsess over brand. Just ask a pharmacist or pick a brand at random. If you have to pay for test strips out of pocket, you might want to consider that cost when you choose your brand of monitor. Test strips are not interchangeable between different brands and models.

Generally speaking, though, it doesn’t matter what you get. Just make sure you have a blood sugar monitor wherever you spend a lot of time.

To use your brand new blood sugar monitor, follow these steps:

You’re “supposed to” wash your hands first and clean your finger with an alcohol swab, but I pretty much never do that. I might wipe my finger on my pants every once in a while.

Here’s how to “read” your blood sugar numbers.

If you’re truly new to the Diabetes Club, you’re probably wondering how to interpret the numbers you get from a blood sugar monitor. Here’s a handy chart that I stole from somewhere on the internet:

It says “fasting” blood glucose level to indicate that these blood sugar readings are for a person who has an empty stomach.

Basically, here’s what’s important: Your fasting blood sugar … again, that means you haven’t eaten recently … should be in the yellow or green areas. If you eat a meal and check your blood sugar 60-90 minutes later, you might get up into the 180-200 mg/dL range or higher. That’s not ideal, but over time you will learn to keep that number in check.

Note that I’m ignoring the mmol/L column … that’s just another unit of measurement for blood sugar. I guess it’s like miles vs. kilometers. I go by mg/dL because that’s what my blood sugar monitors default to.

But anytime you eat something, your blood sugar is bound to go up! The thing you need to get used to is eating things that don’t make it go up too much.

If I eat a meal, and then an hour later I see that my blood sugar has increased by 100 mg/dL (which almost certainly means that I’m in the 200+ range), then I know that I shouldn’t have eaten whatever I just had.

But if you haven’t eaten in several hours (“fasting”) and your blood sugar is at 180, that ain’t right! Your doctor needs to know about that.

When I’m on an empty stomach, like when I wake up in the morning or a few hours after eating, I’m usually somewhere between 90 and 120.

So that’s how I look at my blood sugar numbers. You will bounce around a lot because of food, but in my non-medical opinion, if you can mostly stay below 180, you’re good!

And if you go over 200 mg/dL, there is no need to panic. I once hit 340 after eating a couple of bell peppers (!) and I basically just said holy shit and went about my day. It happens.

Get a blood sugar app for your phone.

I personally use one that’s just called “Glucose.” There are lots of apps out there, and they have various features. All that matters is that you can create a log of your blood sugar readings.

I used to use this “Glucose” app (above), but now I’m using the Accu-Chek Connect app (below) because I have Accu-Chek blood sugar monitors that I use both at home and at work. The blood sugar device automatically sends the number to the app, and it makes a graph. It’s the cat’s meow!

I live in Korea, so the device I use is called the Accu-Chek Instant. They might sell a similar device in other countries under a different name. For example, in the U.S., you can get the Accu-Chek Guide (Amazon link) and it will work with this same smartphone app.

If you’re new to diabetes, do what I’ve been doing: Test your blood sugar right before you eat, and when you finish eating, set a timer for one hour. When the timer goes off, test again.

Pay attention to what’s causing your blood sugar to spike, and pretty soon you’ll have a very good idea of what works for you and what doesn’t.

If you eat something that causes your blood sugar to increase by 100 mg/dL, make a point of avoiding it! Or at the least, eat it in much smaller quantities.

These are the foods I generally try to avoid:

If I eat bread, I’m eating whole grain. If I buy pasta, it’s whole wheat (and even that has to be in somewhat limited quantities). I try to make the majority of my diet meat and vegetables, which is why I eat a lot of tacos.

Exercise if your doctor tells you to exercise.

Full disclosure: I don’t really exercise. I walk my dog and that’s about it. But I’m not overweight, so that’s not a big risk factor for me. In fact, I lost about 10 lbs. after changing my diet to be more diabetes-friendly.

If you’re overweight and your doctor orders you to exercise, you should do it. No excuses!

And one last thing: There’s *probably* no food that you have to give up for the rest of your life!

Yeah! That’s right. Candy, ice cream, pasta, cookies … these are the things you’re told that you can’t eat if you have diabetes. True, you should make a habit of staying away from these foods, but what about very limited quantities, and only once in a while?

If your blood sugar readings are anything like mine, then a small treat here and there won’t hurt. I don’t know what other Type 2 diabetics are like, but I feel like my case is somewhat on the mild side. Or maybe it’s very typical. I really have no idea.

I take Metformin every day (I recently saw a doctor who switched me to a Metformin substitute called 다이아백, not sure of the English name), so I’m sure that helps to keep my numbers down. But even when I forget to take it (usually on weekends or days off from work), I’m not seeing huge sugar spikes.

If you’re routinely hovering around 200 mg/dL or higher, then you probably need to be extra careful. I’m no doctor, but I definitely wouldn’t mess with off-limits foods if your glucose is always sky high.

This is how you can give yourself “permission” to have a treat once in a while. But don’t be stupid about it! Keep careful track of what you’re eating and what it’s doing to your glucose levels.

So that’s all I’ve got. Good luck and welcome to this shitty club!