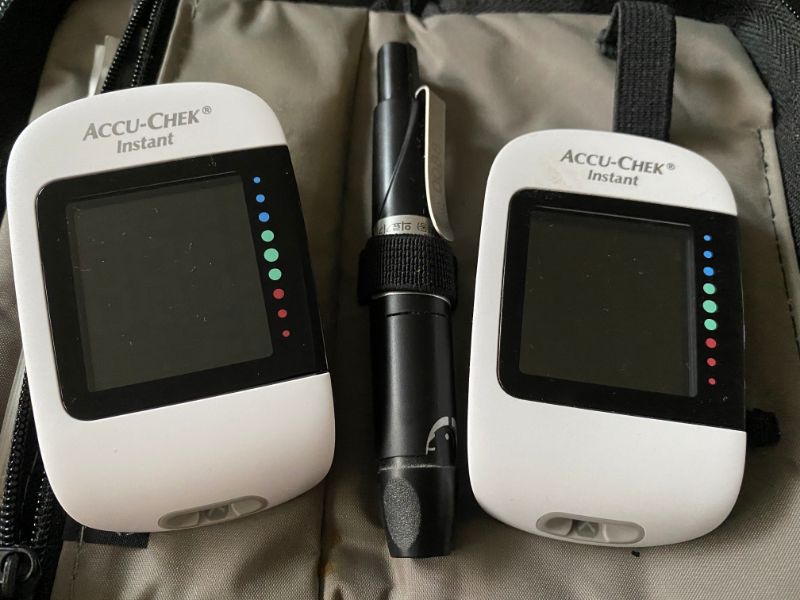 I’ve tried several different blood glucose meters … B|Braun Omnitest 3 (which I don’t think is sold in America), Caresens N, Accu-Chek Performa … and they were all basic in function and basically the same all around.

Then I got an Accu-Chek Instant, which is compatible with Accu-Chek’s “Accu-Chek Connect” smartphone app. And my whole world changed instantly!

Ok that’s a slight exaggeration. But I certainly liked the Accu-Chek Instant enough that I asked Accu-Chek if it would be possible to pair two of them to the same smartphone.

Naturally, their support rep was incredibly unhelpful, so I just decided FK IT I’LL DO IT LIVE!!!! Sorry. What I mean is, I decided to just buy a second Accu-Chek Instant and see what happens.

So that’s what I did. And it worked! Hooray. Now I can have one at home and one on my desk at work.

I was a bit concerned that pairing my second Accu-Chek Instant to the phone app would cause my first Accu-Chek to get forgotten, as if the app can only recognize one glucose meter at a time. But no, the app was able to add my second glucose meter without disowning the first.

I tested my blood sugar with one Accu-Chek Instant, synced it to the app, and then I did the same with the other. No problemo!

And for anyone wondering how to pair your Accu-Chek Instant blood glucose meter to your phone, here’s a handy video:

If your Accu-Chek blood sugar monitor goes by a different name (Accu-Chek Guide, for instance), I’m guessing that you will also be able to pair two of them to your phone. But that’s just a guess. Don’t get mad at me if you get two of them and your whole world turns to shit.

Everything you wanted to know about diabetic lancets but were afraid to ask
How much does insulin cost in Korea? Not much!
My new blood sugar monitor