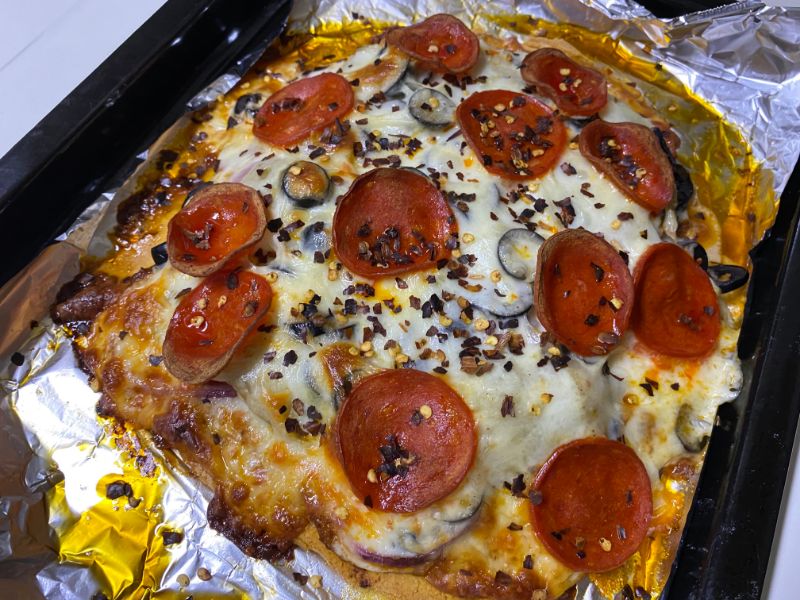 Once upon a time, I ate a lot of pizza. I was in the habit of eating pizza at least once a week for lunch, and then more pizzas would get peppered into my diet at other times. Shit, maybe that’s why I’m a Type 2 diabetic. Anyway … upon learning that I have goddam diabetes, my Golden Age of Pizza came to a screeching halt.

But just a couple weeks ago, I was lamenting my pizza-less life to a friend whose home I would be visiting a few days later. And thankfully, this friend happens to be very empathetic, very considerate, and also very food-savvy.

The two most obvious questions any diabetic would ask are:

To answer the first question, I’m going to say YES! it was good pizza, but there’s a caveat.

But it was PIZZA! And when it comes to pizza, all the good shit sits on top of the baked dough (a.k.a. pizza crust), and that’s what you’re really after.

As for the blood sugar hit, let’s look at the numbers:

This was on a Saturday evening, and I hadn’t eaten for a few hours. And I don’t think I had taken my diabetes drugs yet, either.

That’s not a typo! Granted, I only had two pieces of pizza (it was pretty filling), but I waited the requisite hour before checking the blood sugar again. NO CHANGE. Crazy, right?

When I left to go back home, Jane insisted that I take the leftover almond flour pizza dough with me. I did, and a few days later I made my very own pizza at home.

Would I be able to replicate the blood sugar results that I got at Jane’s on Saturday night? After all, a scientific conclusion ain’t worth shit if you can’t replicate the results of the experiment.

This was on a Wednesday night. I hadn’t eaten in several hours, and I was really hungry. Also … yes, that dough kept just fine for several days, and I think it would have kept for a few days more.

OK, this one-hour-later result isn’t exactly the no-change result from Saturday at Jane’s, but it’s pretty goshdarned close! Also, this time I had eaten FOUR pieces of pizza, whereas I had only eaten two at Jane’s.

And just to be really, really sure of the results, I did an additional check after another 30 minutes had passed. That one was 119, so my blood sugar was on the way down. Yessss.

In addition to the quantity of pizza inhaled, another variable to consider is that my pizza toppings were a bit different from when I was at Jane’s place. Still, it all boiled down to some very similar components:

Note that neither the original pizza nor the Leftover Dough pizza used any actual “pizza sauce”!

In my past life, I might have just cracked open a jar of Ragu and dumped it on the crust, but then again, in my past life I wouldn’t have been looking for a diabetes-friendly pizza.

I didn’t check my blood sugar before eating! Gasp. I’m such a sinner. But I was eating this leftover pizza during my lunch break on a work day, and the end result really speaks for itself …

This was about an hour after eating my pizza leftovers, which amounted to two pieces of almond flour pizza. To round things out stomach-wise, I also ate some leftover tofu & pork stuff that has become a regular part of my diet lately (more on that in a separate post later on).

So if my blood sugar after eating two more pieces of pizza + some tofu pork was only 128, I think we can conclude that my blood sugar wasn’t very high to begin with.

Is this conclusive evidence that eating pizza made with almond flour is easier on the blood sugar than “normal” pizza? I’m gonna say YES.

And the last test, while far from scientific, ENDED with a reading of 128.

Once again, I want to point out two very important things here:

In conclusion, if you have goddam diabetes and are dying for some damn pizza, this is the way to go!

As long as you’re using ingredients that are pretty free of carbs and sugars, you should be safe. But definitely do those before-and-after blood sugar checks the first time you make your own almond flour pizza.

🍕 A widdle pizza pita thing I made 🍕
Yes! Heinz "No Sugar Added" ketchup is way easier on the glucose than *regular* ketchup
Diabetes blood sugar before and after: Campbell's Soup (Creamy Chicken & Dumplings)
Sorry, but tamales are not bueno for diabetes 🙁
Eating that big pile of onion rings was not a good idea
Half a Korean pear is better than no Korean pear