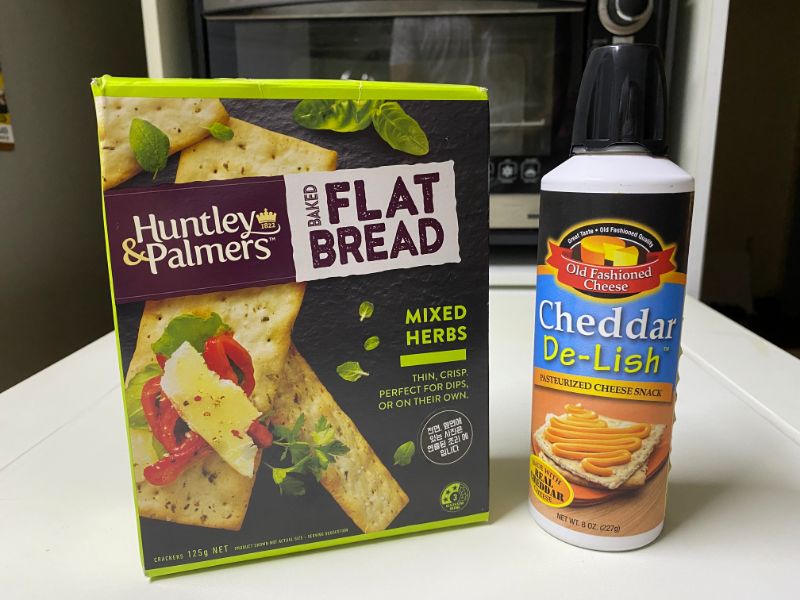 I’ll admit this is a pretty stupid test. Most diabetics don’t lose sleep over whether they can eat crackers, and even fewer are wondering about their tolerance for Easy Cheese, a.k.a. Squeeze Cheese, a.k.a. Cheese-Flavored Goo in a Can.

But you know what? I ate some crackers. And I also ate some canned cheese-flavored goo. And I did the tests. So I shall now release the results of this very dumb experiment!

Before getting started, I should explain how I did this test which, in reality, was three tests. I ate:

The crackers in question are Huntley & Palmers Mixed Herbs Flatbread crackers. They sound fancy, but in the end they’re just some damn crackers. They are, however, long and rectangular, so they’re bigger than your typical Ritz or Wheat Thins.

And again, I’m referring to my canned cheese as “Easy Cheese” because that’s familiar to most canned cheese connoisseurs. The actual “brand” is Cheddar De-Lish … but honestly, who the hell cares.

This reading of 116 was soon after work, so I hadn’t eaten anything in several hours.

I carefully zigzagged the Fake Easy Cheese all over four crackers and unceremoniously gobbled them down before taking Terry out for a walk.

This ridiculous reading was about an hour after I finished my four crackers and Fake Easy Cheese.

Again, this was after work. Basically the same conditions as Test #1, but on the very next day.

For this test, I ate three plain crackers, which sucked. These crackers were not meant to be eaten by themselves. Then I had one cracker with the zigzag of cheese.

Why not eat all four crackers plain? I dunno! I wanted some damn cheese. Those first three plain crackers were hard to choke down.

This reading was about an hour after I finished my three plain crackers and one with yellow goo.

So I actually laid out four crackers, put cheese on all of them, and then I carefully lifted the cheese off of three crackers to make one gigantic Mega Cracker.

This reading was about an hour after I finished eating Mega Cracker.

I think it’s pretty clear that these crackers are very, very bad for the blood sugar. But the “good news” is that Mega Cracker barely made a dent on the glucose meter! Fake Easy Cheese seems like it’s very friendly.

Does this mean that ALL crackers are bad and ALL cans of cheese are safe to eat? I’m inclined to say no, that’s probably too broad of a generalization.

But if you really need to make comparisons … like you’re sitting there with a box of Ritz and a can of Easy Cheese and you’re freaking out … all you need to do is look at the nutritional info on each product.

The things you want to look at are carbohydrates and sugars, and of course take into account the “serving size” which might be different between brands.

So in conclusion: SQUEEZE THAT CHEESE WITH IMPUNITY! But lay off the crackers if they’re anything like Huntley & Palmers.

And just for the record, after I squeeze the rest of this can of Cheddar De-Lish directly into my mouth hole, I’m going to retire from the canned cheese game. I only bought this stupid can of cheese because I thought it was a clever way of tricking Terry into taking some gross powdered medicine that tasted like ass. It didn’t work. And yes, I tasted the medicine. I don’t blame Terry for refusing to eat it, even in a glob of cheese.

Newsflash: If you're diabetic, one little piece of Halloween candy will NOT kill you!
Hey diabetics: THIS is how you eat a Burger King Whopper!
This wheat bread sucks!
Sweetened soy milk is bad for diabetics ... right? Wrong! Probably!
Egg noodles are NOT more diabetes-friendly than regular noodles, and that sucks
Diabetes + KFC = No problemo!

Tags: Blood sugar before and aftercheesecrackersfoods that are bad for diabeticsjunk food