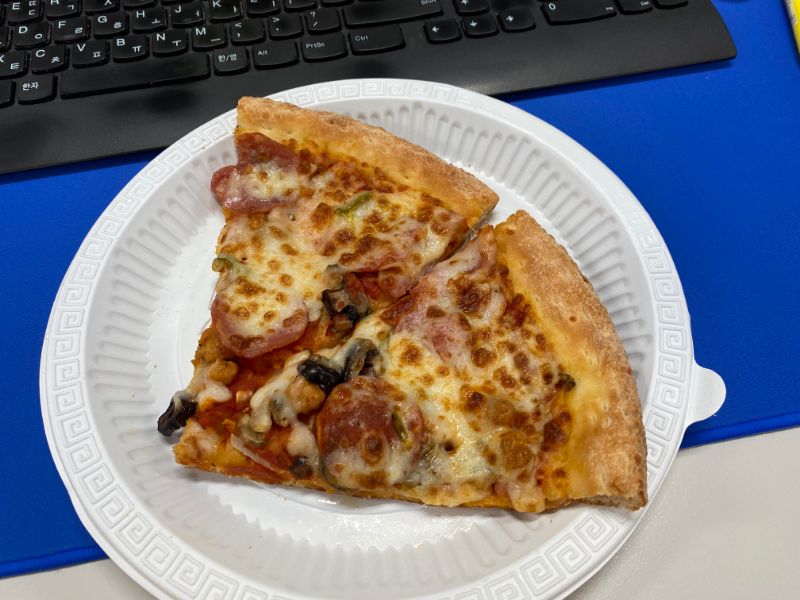 Every so often, a whole bunch of pizza just magically appears in my office. So when this happened a week ago, I grabbed two slices and threw them in the fridge for later.

I already knew what all diabetics know: Actual pizza, not the almond flour kind, but “real” pizza from a place like Papa John’s, is bad for diabetics. The pizza dough is just too doughy and full of carbs. And yes, this pizza was from Papa John’s here in Korea.

But since I had never documented my past pizza fails, I decided to eat two slices of pizza and make it official! The things I do for science.

The toppings on this pizza were your typical “supreme” toppings: pepperoni, sausage, onion, black olives, and I think there was a small amount of green pepper in there, too.

As far as size goes, these two slices were pretty average. The size of a “slice” of pizza can vary greatly, but suffice it to say that these were pretty normal. Not tiny, but far from some of the huge slices you might see elsewhere.

This reading of 111 was the following morning after Pizza Day. I hadn’t eaten anything yet, and this pizza became my breakfast.

Blood sugar reading after about 30 minutes: 183

I usually wait a full hour before testing the glucose again, but I was heading out of the office for a little vape break.

I know, I know! Vaping is bad. But I used to smoke cigarettes so … it’s less bad?

The reason I did this interim test was so that I would be able to spot a noticeable increase from vaping.

I figured that if the pre-vape test showed only a small glucose increase, then a large post-vape increase could be an indicator that vaping was what spiked the blood sugar. It’s not a perfect testing method or hypothesis, but it’s what was possible at the time.

As it turns out, my flawed testing method was a moot point. The pre-vape increase in blood sugar was far from small! 111 → 183 is all pizza.

I don’t think vaping causes blood sugar to go up (more on that at a later date), but I didn’t want 15 minutes of vaping to throw a wrench into this little pizza test.

And, as we can see, the pizza was already sending my blood sugar sky high before any vaping took place! And I didn’t even eat the crusts (see pic down below).

So my blood sugar continued to climb after that pre-vape test.

To me, this indicates that the big glucose increase was mainly from the pizza, not the vaping. It’s also possible that vaping contributed, but the glucose was already shooting upward before the vape.

There’s not much else to report here! Conventional pizza sucks. Diabetes sucks. This test sucks.

Goodbye, pizza! We had a good run.

This wheat bread sucks!
Are strawberries safe for diabetics? Well ... yeah! Turns out they are
Diabetes blood sugar before and after: bananas, carrots, and Korean pear
Yes, you can survive ONE Girl Scout cookie!
Go ahead and eat those McDonald's chicken nuggets ... but say NO to the sauce!
Yes! Heinz "No Sugar Added" ketchup is way easier on the glucose than *regular* ketchup