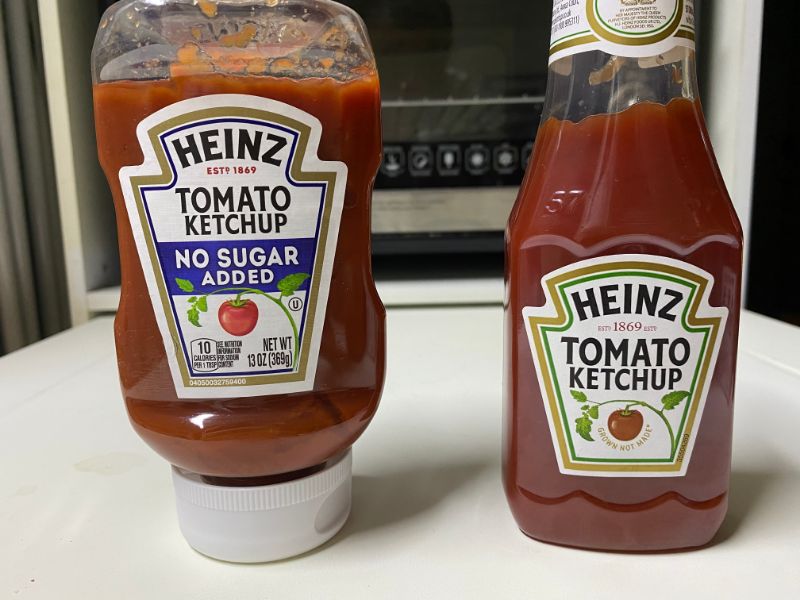 Yeah, yeah, I know … it might seem pretty obvious that the ketchup with less sugar is better for the ‘beetus. But I suppose the point of this post is to show how much less shitty the No Sugar Added ketchup is.

Ketchup in general is pretty bad for diabetes. I think that’s very evident from my little onion ring experiment.

When I tested out those onion rings, the glucose results sucked balls, and I blamed most of that on the onion rings themselves.

But now that I look back on that test, I’m pretty sure the blood sugar spike was because I ate my onion rings with what was essentially a gallon of ketchup. Not diabetes-friendly ketchup, the bad-for-diabetes kind! So that was dumb.

In this ketchup test, I used some fake crab meat as a stand-in for the onion rings. I just had this crab stuff laying around, so I mixed the ketchup with some horseradish and hot sauce to make a very ghetto seafood cocktail sauce.

So let’s get to the test results! First up: “regular” ketchup.

This was on a Saturday evening, several hours after the last time I’d eaten anything.

This reading was about an hour after I finished eating that shitty fake crab meat.

This was actually several days BEFORE the regular ketchup test! Yeah. I just blew your mind.

This reading was about an hour after the fake crab.

In both tests, I made my crappy cocktail sauce with the same amount of ketchup: 50g. Then I added the horseradish and hot sauce.

The amount of fake crab was … ehh, more or less the same.

So we have an increase of 109 from “regular” Heinz ketchup. The increase from the No Sugar Added ketchup was “only” 77. Still not great, but that’s a much lower glucose increase.

I realize this test isn’t totally scientific since there are variables like the quantity of horseradish, hot sauce, and crab … but most of that was well within ballpark range between both tests.

In conclusion: No Sugar Added ketchup is good! Regular ketchup is shit!

Also, it might just be best if you avoid ketchup altogether. Even the No Sugar Added variety of Heinz is not exactly bueno.

Sometime in the future, I will re-do my onion ring test with No Sugar Added ketchup. In the name of science! Also cuz I want some goddam onion rings.

If you are diabetic, do NOT eat these Korean noodles!
Excuse me while I toss my Korean salad
Glucose Meter Comparison: Are They Really All the Same? Also: Do NOT Eat Korean Buckwheat Noodles!
That lil' quesadilla probably won't hurt you! But lose the tomato, por favor
Diabetes blood sugar before and after: Korean food (spicy tofu soup 순두부)
KFC Chizza - Is it cool for this diabetic to eat TWO?