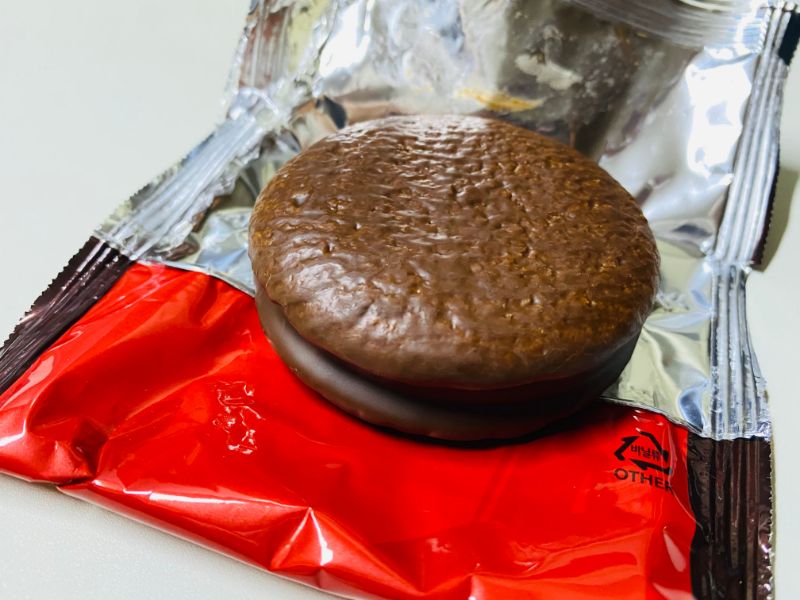 You know what a Moon Pie is, right? It’s basically a chocolate-flavored hockey puck.

Now, I did NOT go out and buy this thing. Even pre-diabetes me wasn’t a big fan of Choco Pies. But the corner grocery guy, who has a great fondness for Terry the Dog, gave it to me as a sort of gift. I think he actually meant for me to feed it to Terry. Uh … thanks?

He’s a really nice guy. But like many people, Grocery Man clearly doesn’t know that chocolate is a no-no for the doggies.

So I held on to this stupid Choco Pie for probably a year or two. And the other day, I was just like Imma eat this damn thing.

And here’s what happened!

This was last night (Monday), not too long after I got home from work and several hours after the last time I’d eaten anything other than maybe some dried seaweed (it’s a regular thing I snack on at work).

This reading was about an hour after eating the Choco Pie.

All right, this was pretty predictable! There was no way that eating a Moon Pie/Choco Pie was going to end well. For such a tiny little “treat,” +85 mg/dL is horrendous.

But I felt OK about taking the chance on this Korean Moon Pie for a few reasons:

I think my first two excuses for eating the Choco Pie were pretty sound.

But the exercise thing? All I know is that exercise helps with maintaining glucose levels. I don’t know how immediate the effects are, and I also don’t really know what kinds of exercise work best for lowering blood sugar.

Anyway, I figured eh what the hell, I’ll see what happens.

I used to go to the park near my home to work a sad, rusty bench press (about 41 kg/90 lbs., including the bar), and then I would do some dips.

Now that it’s getting cold, and I don’t like being cold, I have moved my workout indoors. These days I’m doing pushups and 8 kg/17 lb. dumbbell curls. I do this about twice a week. Cuz I wanna get huuuuuuuuge.

So my blood sugar is at 189, and within a few minutes I’m pushing and curling.

It was fairly strenuous … I did pushups, rested maybe 30 seconds, then I did curls, and then I rested about two minutes before starting my sets again.

These are the sets I did …

I only did three sets of curls because I’m still “easing into” curls. My previous workout didn’t include biceps.

I had gone from pre-workout 189 to post-workout 187. Shit. So my glucose wasn’t really going down during the workout.

So I waited 15 minutes and got:

Then I waited another 15 minutes, but I confess to eating two fried eggs during this time (gotta get that post-workout protein, amiright):

I gotta be honest, that doesn’t sound like much. I mean, 189 was already an hour after eating the Korean Moon Pie. My workout took about 20 minutes. And it still took me 30 more minutes to get down to 148. WTF!

I may try experimenting more with exercise numbers in the future, but this particular “test” was kind of a bust.