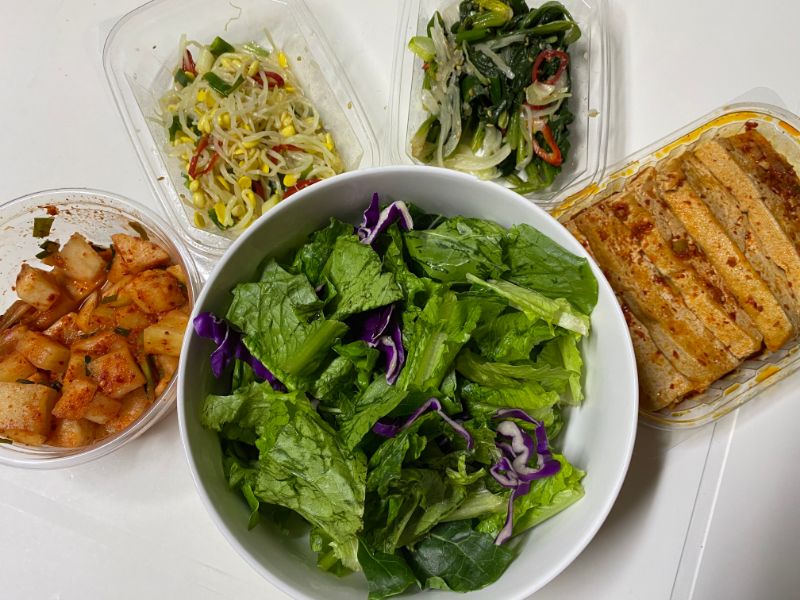 One of the Korean dishes that I love most, which I can no longer eat thanks to GODDAM DIABETES, is bibimbap (비빔밥).

Take away the rice because it will kick your diabetic ass, and what do you have left? All that other stuff!

I guess I’m writing this because “normal” green salads are boring. My ghetto version of bibimbap-without-the-bap (bap is rice) is easy to make because I just buy the Korean veggies and toss them in a bowl with some greens.

If you live in Korea, getting the Korean vegetables is easy. Just go find one of those stores that sell “side dishes” (반찬) packaged in plastic boxes and tubs, and you’re in business.

If you don’t live in Korea, you could settle for whatever you find in the produce section of your nearest grocery store. Or you could hunt down a Korean grocery.

If you’re not sure what vegetables to get, check out the picture of bibimbap up above. It includes:

You’ll notice that what I put in my salad here in these pictures is not exactly the same stuff, but who cares! I just used what I had on hand.

Also, I buy my vegetables pre-prepared because I’m what you’d call “lazy AF.” The mushrooms should be cooked, and probably the squash, too. Nope. Not doing that.

So after you gather all the stuff you want, cook the things that seem like they need to be cooked (like the mushrooms). Or don’t. But definitely fry that egg if you have one!

Then throw it all in a bowl and … TOSS YOUR SALAD! Toss it good, wink wink.

As for “dressing” on this salad, you could go with red pepper paste, a.k.a. gochujang (고추장) and/or sesame oil. That’s what you’d get in a Korean restaurant.

In my case, I just used some homemade red wine vinaigrette.

BUT … that gochujang might push you up a bit. I haven’t tested it yet, so I can’t really comment on that right now.

I’ll update this later if I do the science on gochujang. But for now, if you just go with sesame oil or a vinaigrette like I did, you should be in the clear. I mean, IT’S A DAMN SALAD. But it’s a Korean salad! So it sucks a little less than your typical green salad.

And just to prove how harmless this salad thing is, I did my usual before and after blood glucose tests.

This reading of 111 was basically right after I got home from work.

This reading was about an hour after I finished my Korean salad. And just to be sure nothing funny was going on, I checked again about 20 minutes later. Still 128!

So there you go. Salad ain’t gonna hurt you unless you put something stupid in it … LIKE RICE! Starchy, delicious rice. Sigh.