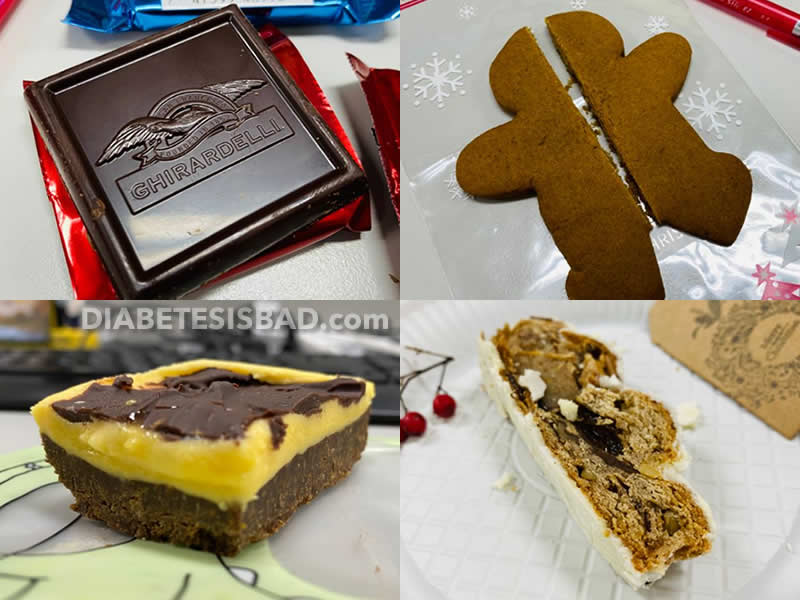 Now that the holiday season is officially over, it’s time to come clean: I ate a bunch of Christmas cookies and other holiday treats! But not all at once, obviously. Cuz that would be craaazzzyyy.

First, there was that tiny snickerdoodle that I ate a few weeks ago. And then my coworkers just kept on coming to the office with more cookies and baked goods.

I spaced my little holiday treat tests out over several days. Let’s see how terrible they were for my blood sugar!

My coworkers said it looked like an “Archway knockoff,” which I had to google. The coworker who baked it (thanks, Shannon!) called it a cashew nougat cookie.

Meh, whatever! Since my coworker bagged them in pairs, I ate each one on different days. And the results were … confusing.

Hey, what the hell??!! Cookie #1 was in the morning. Cookie #2 was the next day, late in the afternoon. I dunno what happened here. My body is weird.

There were gingerbread cookies that had frosting, and there were also some that didn’t (thanks, Shannon!). So, being a … smart cookie … I went for the one without frosting! Go ahead and groan. I deserve it.

I think the other half of the cookie is still in my desk drawer! I guess I forgot about it. But an increase of 26 from HALF of that cookie is not bueno.

One of my coworkers (thanks, Liz!) is Canadian, so she made Nanaimo bars! I was like ok what the hell is a Nanaimo bar, so I googled it.

Apparently, Nanaimo bars are a uniquely Canadian thing. According to Cooking Classy:

They are a popular Canadian confection, basically a layered bar cookie, that to me tastes very similar to a richly chocolaty, loaded fudge. They are named after the west coast city of Nanaimo, British Columbia.

They consist of 3 layers, a cracker crumb and chocolate base, a custard flavored icing and then they’re finished with a chocolate coating.

I could tell just by looking at this thing that it was gonna be bad! So I ate half, and then the other half later.

The Nanaimo bar was delicious, but I’m really glad I cut it into two pieces! It’s just as dangerous as it looks.

First, here’s a nice picture of a full slice of Stollen.

Once again, I had to google the thing I was about to eat! One of my coworkers (thanks, Avery!) is a big fan of this German pastry, so she ordered it from I dunno where.

According to International Desserts Blog, Stollen is a:

Buttery yeast bread with candied zest, sliced almonds, rum-soaked raisins, currants, and dried cranberries (and marzipan if you like it) topped with a buttery layer of powdered sugar – one of the best German Christmas treats!

But I only ate a tiny piece! And the results were still pretty horrifying.

LOL. From a TINY sliver of Stollen. Non-diabetic me would love Stollen, but holy shit! An increase of 41 mg/dL from this tiny thing.

I vaguely recall reading something in a Facebook group about how dark chocolate is less bad for diabetes than regular milk chocolate.

Yeah, I know. Facebook isn’t exactly the best source of information! But the googling sort of corroborated what the Facebook dummies had to say.

And it just so happened that I forgot about an Easter gift bag that a coworker (thanks, Vicky!) had given to everyone in the office several months earlier. And that gift bag contained three Ghirardelli chocolate squares.

To be clear, this was after I gobbled down ALL THREE CHOCOLATE SQUARES! One of my coworkers was like I can’t believe you just downed all that chocolate. LOL, Paige! This is how ballers do it.

So an increase of 48 mg/dL isn’t great. But considering that I ate three chocolate squares, it’s really not all that bad!

So there you go! Christmas cookies and baked treats are never going to be good for you, but you can eat them in moderation.

And once again … STOLLEN WILL KILL YOU! Don’t eat it.