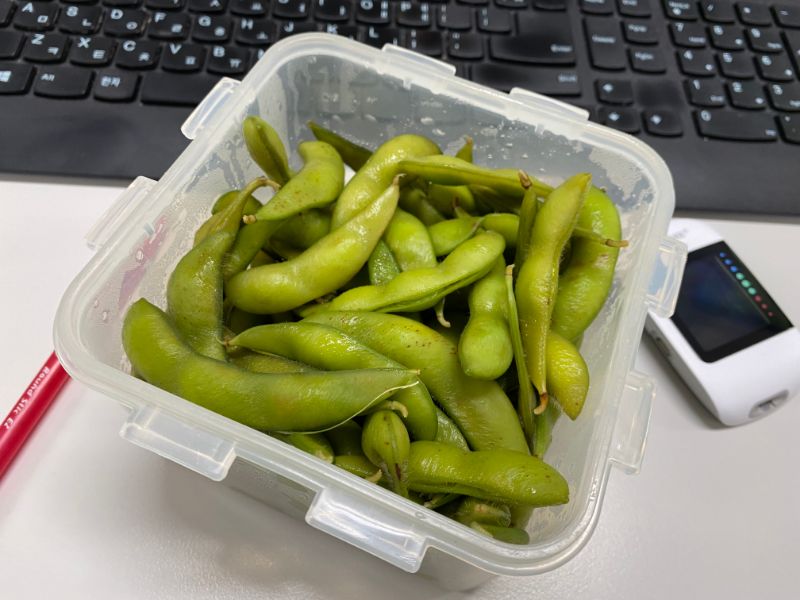 Such is life of the diabetic! Groan. But it’s not all bad.

If you’ve spent any time in Japanese restaurants, you’ve probably had edamame before. If you haven’t, it’s pronounced ed-ah-MAH-may.

And yes, they’re really just soybeans. So why are they called edamame? I dunno man. Because … Japan? I guess?

What I actually can tell you is that edamame is super easy to prepare. Just buy it frozen and:

Here, this nice lady will demonstrate.

To eat edamame, just give the pods a squeeze and suck the beans out, one at a time. Or suck them all out at once if you’re totally insane! Your call.

This reading of 126 was in the morning after arriving at work.

This reading was about an hour after I finished my edamame.

Gotta be honest, +27 mg/dL is more of an increase than I was expecting. But to be fair, I did eat a shitload of edamame! I mean, look at this mountain of empty pods.

I didn’t weigh this edamame before eating it, but it was probably at least 3/4 of the 500g bag that I cooked the night before.

After this test, I did edamame again about a week later.

This reading of 116 was also in the morning at my desk at work.

This reading was about an hour after I finished my edamame … and I think it also includes the cherry tomatoes and avocado. This was a couple weeks ago so I don’t really remember. ¯\_(ツ)_/¯

I think it’s pretty safe to say that edamame is friendly to the diabetes. I ate a LOT of soybeans, and the glucose increase was pretty moderate.

“Snacking” on beans may not sound too exciting, but “edamame” sounds very exotic! Well, unless you’re Japanese. And at least it’s a nice break from all the same boring veggies you’re used to munching on.

Diabetes blood sugar before and after: Subway sandwich (6-inch Spicy Italian)
Go ahead and eat those McDonald's chicken nuggets ... but say NO to the sauce!
Diabetes blood sugar before and after: spicy Korean pork with vegetables (제육)
Sausage, Bacon, & Scrambled Eggs: A Very Diabetes-Friendly Breakfast
Easy Cheese? Yes. Crackers? Hell no!
This iced latte did NOT do "a latte" to move my blood sugar