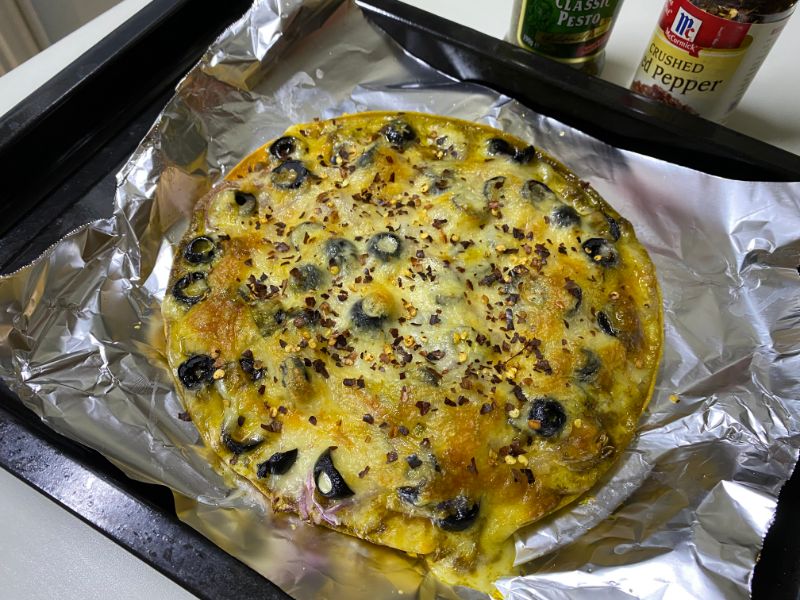 If you comb through enough of my posts here on Diabetes Is Bad, one thing is abundantly clear:

I’ve tried almond flour pizza. And KFC’s fried chicken pizza, a.k.a. Chizza. I put pizza on a pita, which I have dubbed Pizzita. And of course, there’s the ever-present office pizza.

And in this installment of How To Eat Pizza Without Dying, I now present:

I’m still not sure if Pizzilla should rhyme with “tortilla” or “Godzilla.” You decide! No screw that. Let’s go with the Godzilla one. PIZZILLA is a monster! A cheesy, delicious monster.

This latest incarnation of diabetes-friendly pizza isn’t much different from the pizza I made on a flat half of pita bread. The only real difference is that Pizzilla is made on a tortilla that you’d normally use for making a taco.

So if they’re basically the same, why bother?

For starters, I can only find pita bread in one size. Tortillas, meanwhile, typically come in sizes ranging from 6 inch diameter up to 10 or 12 inches. If you’re just making Pizzilla for yourself, 6 or 8-inch should be enough.

Using a tortilla also gives you the flexibility to fold it into a pizza quesadilla or roll the thing up into a big, fat pizza wrap. You could do something similar with pita bread by cutting it into pocket-shaped halves, but that’s not quite as fun.

So I’ve tested several Pizzillas, and the results have been very positive. I mean, why wouldn’t they be? It’s just a tortilla that’s covered (or filled) with pizza stuff! Think of it as an ultra-thin-crust pizza.

And, of course, I use pesto instead of tomato sauce. Tomato sauce will push the blood sugar up, so yeahhh best to avoid that.

Here’s a quick summary of my super-scientific findings.

So, as you can see, there really isn’t much glucose damage from Pizzilla!

However, I didn’t keep careful track of what each Pizzilla consisted of.

The final verdict on Pizzilla?

PIZZILLA IS DELICIOUS! And it’s pretty easy on the blood sugar.

You can also make Pizzilla even safer to eat by getting some low-carb tortillas on Amazon or maybe at your local grocery store. I haven’t tested any such tortillas myself because I can’t find them in Korea.

And if you’re making your very own Pizzilla, I suggest leaving it in the oven for a good long while if you want the tortilla to be crispy enough to pick up and eat like a “normal” piece of pizza.

I put my Pizzillas in the oven for 20-30 minutes at 200° C, which translates to a bit under 400° F. If you don’t mind eating a pizza wrap instead, then cooking it for so long shouldn’t be necessary.