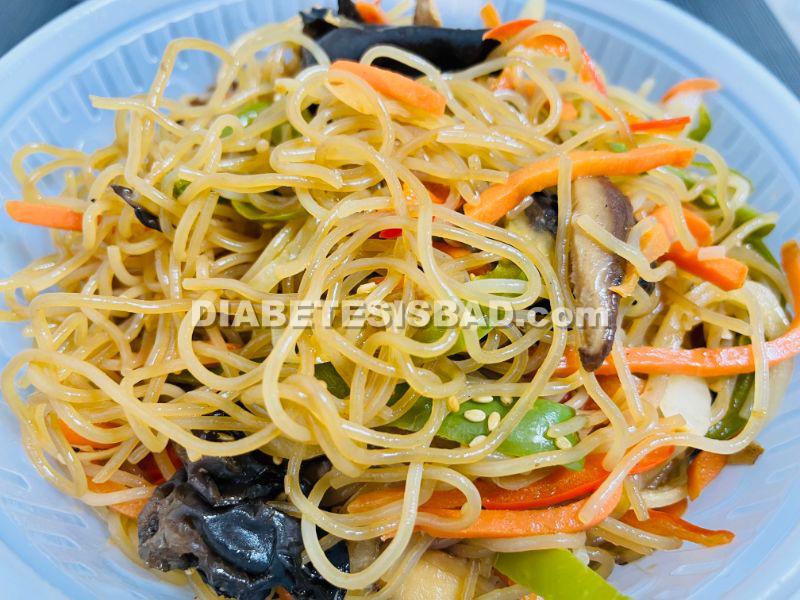 A little over three years ago, I ate some japchae.

Excuse me, what in sam hell is japchae?

Glad you asked! Japchae (잡채) is what white people call “glass noodles,” specifically Korean glass noodles. They’re made from sweet potatoes or something. And they are delicious.

So yeah, I ate some japchae three years ago and the glucose results were terrible. But you know what? I also got a terrible glucose reading from eating bell peppers, and that turned out to be a false alarm.

So I thought maybe I could be wrong about japchae, too. I was pretty sure I wasn’t, but I also wanted to eat some japchae again.

Before looking at the results of my recent japchae binge, here’s a quick reminder of what happened three years ago:

Ouch! That was from eating 200 grams of japchae, which to be honest is a fair amount. These noodles usually don’t constitute a whole meal, but 200g is like eating a full cereal bowl full of them.

So this time around, I did my usual thing: empty stomach, no Diabex (a Metformin substitute), and I didn’t eat until testing an hour later.

I did two tests, and both times I ate the same 200 grams of noodles that I had last time. The only major difference is that three years ago I also ate some Korean pork with the noodles. This time, it was japchae and nothing else.

So here’s what happened:

After Test #1, I didn’t bother doing any additional tests. I just kind of rolled my eyes.

So yeah, my first japchae test was definitely not a fluke. Japchae really IS that bad for the glucose. Cry emoji.

I guess the moral of the story is that if you’re gonna eat japchae, don’t eat a ton. And if you do eat a ton, make sure it’s no more than once every three years.

I love you, japchae! And I also hate you.