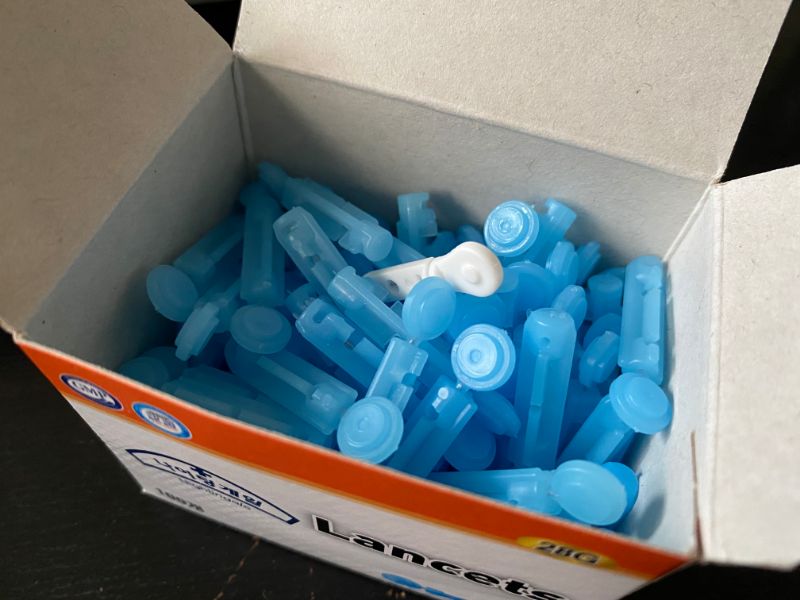 When I was first diagnosed with goddam diabetes, I got myself a B|Braun Omnitest 3 blood sugar monitor with a faulty lancing device. At first, I was like wow this fcking sucks! And that was because I didn’t know the lancing device was faulty. And there was plenty of other stuff I didn’t know because I just didn’t know shit about being a diabetic.

Now that I’ve had goddam diabetes for over a year, I know a lot more about lancing devices and the lancets you use in them. Here are some of the questions I had about this stuff a year ago, back when I was basically a diabetes virgin.

How do I use the lancing device that’s included with my blood sugar monitor?

Since I had gotten a faulty lancing device with my B|Braun Omnitest 3 last year, I actually had to google this!

Here’s what you do:

I said cock and shaft. Anyway, here’s a video that shows a pretty standard lancing device that uses the standard lancet described in a later question down below.

Do you have to use a new lancet every time you check your blood sugar?

Every doctor will probably answer this question with a very cautious yes, you don’t want to risk getting an infection. And the instructions that come with every glucose monitor will say exactly the same thing: Use a new lancet every single time!

My experience has been NO, you do not have to change the lancet every time. And based on what I’ve read in online diabetic chatter, it seems that very few people actually do this.

If you want to be overly cautious and change the lancet every single time, go ahead. Lancets are cheap, who cares. But I don’t believe it’s necessary. The evil lancet industry just wants you to believe you need a new lancet or you will die!

So how often do I change my lancets? Umm. Like once a month? Or every other month? When I’m bored? I dunno! Not very often. But if I feel like sticking my finger hurts more than it should, that’s when I definitely change it. A dull lancet is a painful lancet.

When you buy new lancets, do you have to buy ones that are specific to your lancing device?

When you get a blood sugar monitor, it will come with a lancing device. And there’s a good chance that your lancing device uses the same kind of lancet that many other lancing devices use, regardless of manufacturer.

See that picture at the top of this page? All those blue lancets are the “standard” kind that are more or less universal.

But not all lancing devices can use those blue lancets. Accu-Chek, for example, has their own proprietary “Softclix” lancing device, and it will not accommodate the standard lancet that other devices use.

Do you have to impale the shit out of your finger every time you check your blood sugar?

Noooooooo do not impale yourself! You should only be sticking your finger enough to make a tiny blood droplet come out when you squeeze. Blood glucose test strips don’t need much blood.

If you stick your finger and think oww goddammit that hurt, you’re doing it wrong. Check the setting on your lancing device to make sure it isn’t set to a high number. I have mine set to either 1 or .5 (the notch just below 1).

What’s up with those numbers around the tip of my lancing device?

Which is the most pain-free lancing device?

For the most part, I think they’re all basically the same. But when I started using an Accu-Chek blood sugar monitor (the Accu-Chek Performa), I immediately felt like Accu-Chek’s Softclix lancing device was, indeed, “softer” than the two other finger sticks I had tried (made by B|Braun and Caresens).

Accu-Chek seems to include the same Softclix lancing device with all of their blood sugar monitors (at least, they provide the same one with the Performa and Instant).

So, why is the Accu-Chek Softclix lancing device less painful? I dunno. They don’t use the same lancets that other lancing devices use, so maybe their lancets are sharper. Or maybe the lancing device itself is better engineered to deliver just the right amount of skin puncture.

All I know is that Accu-Chek Softclix is less ouchy for me than B|Braun’s or the one that came with my Caresens N.

If you don’t like your current lancing device, you can buy an Accu-Chek Softclix from Amazon without buying the glucose meter.

When I stick my finger, not enough blood comes out. What am I doing wrong?

I have this problem from time to time. If I have my lancing device set to .5 (the lowest setting), I’ll turn it up to 1.

Another thing you can do is use your thumb to sort of “squeeze” the finger you’re impaling. Press your thumb into the finger so that the skin bulges and becomes more rigid. That’s going to be an easier surface for your lancet to pierce than a finger that’s soft and mushy.

Yes! You CAN pair two Accu-Chek glucose meters to the same device
My new blood sugar monitor
How much does insulin cost in Korea? Not much!