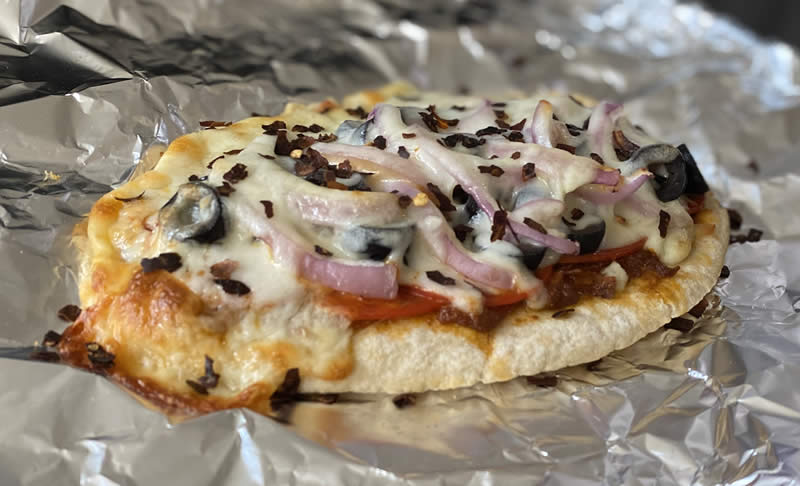 I’ve eaten a little “real” pizza since getting goddam diabetes, and the results have not been great. I didn’t document the glucose numbers, but suffice it to say that they were high enough to more or less eliminate pizza from my world. Grrr.

But I’ve been eating pitas lately! The results have been a bit mixed (more on that at a later date), but today I just happened to have a pita that was missing most of one of its layers.

So I basically had half a pita, but it was a flat half, as in the top layer was mostly gone. To me, it looked like an oval-shaped pizza crust! So that’s what it became.

I used most of the same stuff as when I made that almond flour pizza: pesto (instead of sauce), pepperoni, black olives, onion, and a shitload of shredded mozzarella cheese.

This reading of 100 was maybe an hour or so after I woke up today (Saturday) to the news that Ruth Bader Ginsburg has died. 🙁

And I hadn’t taken my daily dose of Diabex née Metformin yet.

This was about an hour after eating my pizza pita, or pizzita. Or should it be pitizza? Hmm. During that hour, all I did was take Terry out for a short walk.

I was expecting this reading to be pretty low! But in all honesty, 159 is higher than I was anticipating from HALF a pita.

The pitas that I buy are already small to begin with … a whole one is only 70g. And this half-pita still had a bit of the top layer on it, so maybe it was like ~45-50g at the most.

Anyway, this pizza was pretty goshdarned good! It was really easy to make, and it tasted a lot like “real” pizza.

There was a little bit of sogginess on the side where the pita was thinnest, but baking it made most of the pita crunchy. Definitely do NOT microwave this unless you want a big, soggy mess.

And the blood sugar increase, despite being higher than I was expecting, was still well within my comfort zone.

Dear Watermelon, I LOVE YOU
Diabetics can eat potato chips! Whoops, no they can't ...
Diabetes blood sugar before and after: tomatoes and cucumbers
Pizza sucks for diabetics. But not if you make the dough with almond flour!
Newsflash: If you're diabetic, one little piece of Halloween candy will NOT kill you!
Here's a weird snack idea: edamame!