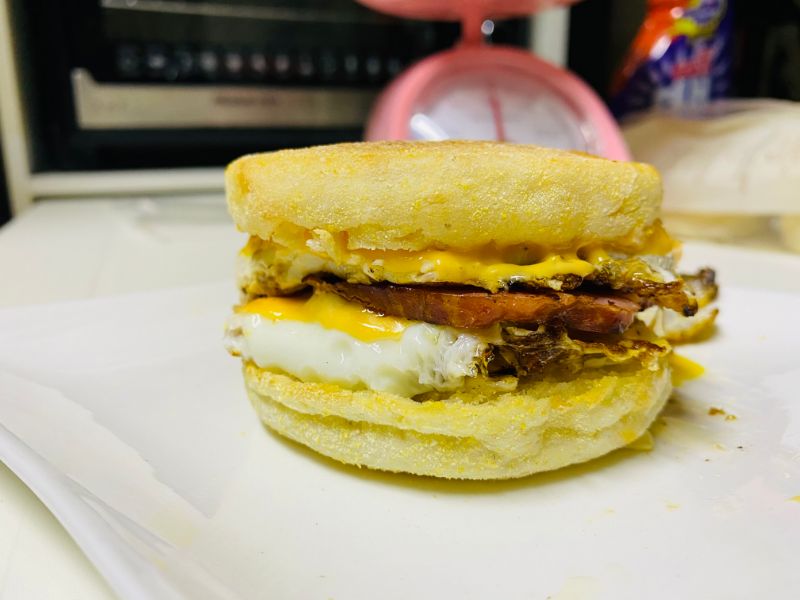 I honestly can’t remember the last time I walked into a McDonald’s. But goddam I would LOVE a Big Mac right about now!

Anyway, getting back to the point, there’s this thing I like to make at home. It’s basically an Egg McMuffin, but it’s actually better than the real thing from McDonald’s.

It’s better than the McDonald’s version because I put TWO eggs on it, and TWO slices of cheese. And more ham!

And thankfully, there is a bakery near me (Paris Baguette, a well-known chain in Korea) that sells pretty legit English muffins.

For those who like to weigh things, the ham in this picture is about 40g. It’s not a lot, but it’s still just the right amount.

This reading of 85 was on a Sunday evening, about 90 minutes after taking my daily Diabex/Metformin.

I usually try to put more time (at least three hours or so) in between the Diabex and any glucose test, but I was hungry and didn’t feel like waiting!

This was an hour after finishing my homemade Egg McMuffin.

So an increase of 40 ain’t too shabby! And just to be sure nothing fishy was going on, I tested again 30 minutes later. That one came in at 121.

I have to say that it’s POSSIBLE that having only 90 minutes between my Diabex and eating this beautiful mess was a factor in the fairly low blood sugar increase.

But I should also note that I’ve tested these English muffins before (but not on Diabetes Is Bad), and the results were pretty similar.

If you plan to make a similar breakfast sandwich at home, your English muffin will probably give you different results. But if your glucose is fairly low at the start, don’t be afraid to try it!

Sausage, Bacon, & Scrambled Eggs: A Very Diabetes-Friendly Breakfast
If you have diabetes, this is probably why Campbell's Chunky Soups are really bad for you
Hey diabetics: THIS is how you eat a Burger King Whopper!
Hail, Caesar! The salad, not the Greek dictator
Dear Watermelon, I LOVE YOU
That lil' quesadilla probably won't hurt you! But lose the tomato, por favor