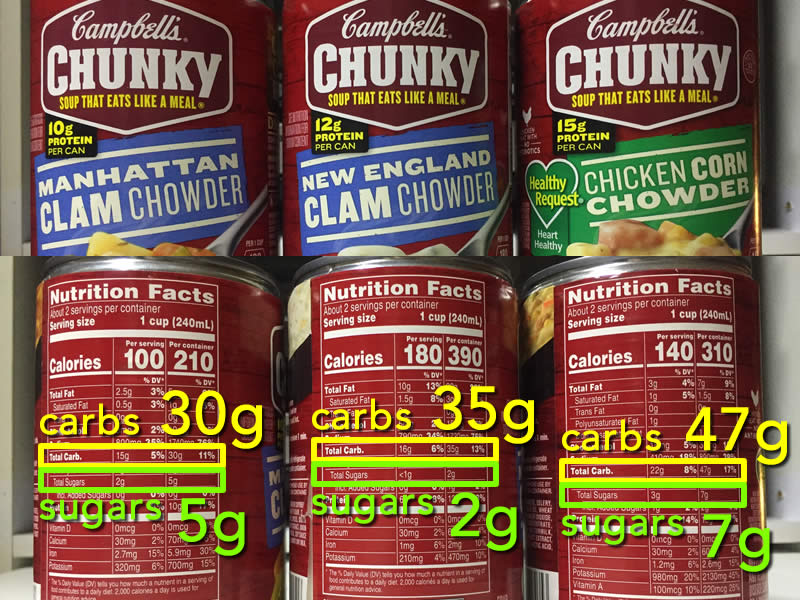 I’ve tried a few different cans of Campbell’s soup since getting goddam diabetes. As far as blood sugar results go, Creamy Chicken & Dumplings was horrifying. Then when I tried Manhattan Clam Chowder, I wised up and removed the potatoes. And a while back, I tried a can of Cream of Broccoli … I no longer have the exact numbers, but they weren’t great. I also have some Chicken Corn Chowder, but eating that seems like a terrible idea, and I’ll explain why down below.

One Campbell’s soup I ate today, however, was Condensed Chicken Noodle Soup. And guess what? It was more or less just fine!

I had a feeling the Condensed Chicken Noodle wouldn’t hurt me too bad, mainly based on the carbohydrate count from the nutrition labeling.

Consider the following “total carbohydrate” and “total sugars” counts from the nutrition labels (per container):

This reading of 111 was basically right after I got home from work. I was starving, but the soup was all I ate. Of course, I watered it down with a can of water, because that’s how condensed soup works.

This reading was about an hour after I finished the soup. During that hour, I went out for a short walk with my dog, Terry.

So an increase from 111 → 149 really isn’t too bad! I guess that’s what you get from 20g of carbs and zero sugars. The real downside of Condensed Chicken Noodle is the ridiculous amount of sodium that comes with it (basically 100% Daily Value).

So if Campbell’s soup is so horrible for diabetes, why do I keep eating it? Because I already had a whole bunch of Campbell’s soup in my kitchen cabinet before I joined the damn club! And I still have a bunch. I figured I might as well test drive them.

In the beginning, I really had no idea whether 30g of carbohydrates was a little or a lot. I am now realizing that it’s kind of a lot. And the sugar content of Chunky Soups certainly doesn’t help.

Condensed Chicken Noodle, with its 20g of carbs and no sugar, doesn’t seem to be much of a threat in terms of the ‘beetus (based on one can, anyway). But I’ve seen firsthand what Creamy Chicken & Dumplings can do to the blood sugar with 29g/3g, and it’s not good.

So how much would Chicken Corn Chowder’s 47g of carbs and 7g of sugars blow up my glucose? I’d rather not find out!

The moral of the story is this: Campbell’s Chunky Soup is really, really bad for diabetics. If you want proof, I wrote a whole thing about the carb and sugar numbers. The carb content is high, and then you have to add sugars on top of that. If nothing else, at least now you have a frame of reference for what the carb/sugar nutrition info really means.

Unfortunately for me, I still have a shitload of Campbell’s Chunky Soup in my kitchen. I guess I’ll eat it eventually, but I may have to eat just half a can at a time.

Diabetes + KFC = No problemo!
Diabetes blood sugar before and after: Mexican food (chicken tacos on corn tortillas)
Excuse me while I toss my Korean salad
Diabetes blood sugar before and after: Hormel Vegetarian Chili With Beans
My super-messy, super-delicious homemade Egg McMuffin ... on an actual English muffin!
Egg noodles are NOT more diabetes-friendly than regular noodles, and that sucks

Tags: Blood sugar before and afterCampbell's soupfoods that are bad for diabetics