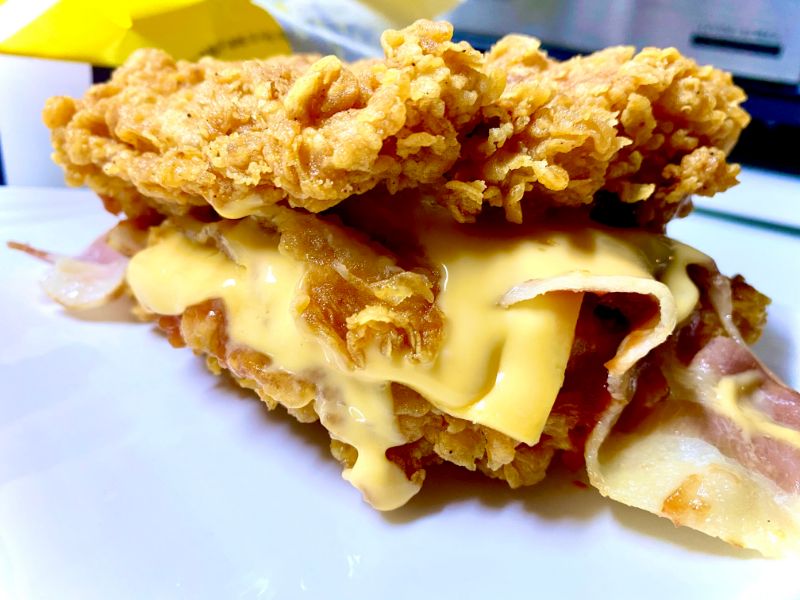 I sat down to write this whole thing about how the KFC Double Down actually IS safe to eat … as long as you SKIP THE HASH BROWN!

And I just now noticed that I already updated my original post on this subject a while back. Hooray for cognitive decline!

So anyway, several months ago, I made the proud declaration that the Double Down is actually very easy on the glucose. The one caveat is that you do NOT eat the hash brown.

In fact, it’s best if you just ask that they just leave it out entirely. That way, you don’t have to deal with pulling it out and lamenting the amount of cheese that it takes with it.

So yeah, this post is pretty unnecessary. But you know what? I already took the damn pictures!! And I’m already mentally committed to presenting my, uh, “groundbreaking” findings on how diabetes-friendly the KFC Double Down can be if you do it right.

When I added that update about eating a Double Down without the hash brown, the new glucose result was 92 → 135.

Here’s what happened TODAY, months after my update, when I ate yet another KFC Double Down without the big potato patty in the middle.

This reading of 101 was today, Saturday, not too long after waking up late in the afternoon. Ok, evening. Yeah I slept all day! I regret nothing.

So this whole post, which is mainly a product of my growing senility, confirms what I already knew months ago: Without the hash brown, the KFC Double Down is pretty harmless as far as diabetes goes.

It’s still a greasy, fatty, unhealthy hunk of deliciousness, but at least it won’t kill you in the glucose department.

Yes, "real" pizza is very, very bad for the 'beetus
Diabetes blood sugar before and after: Korean food (soybean paste soup 된장찌개)
Diabetes blood sugar before and after: tomatoes and cucumbers
Are strawberries safe for diabetics? Well ... yeah! Turns out they are
Japchae (Korean glass noodles) revisited: Still delicious! And still SO bad on the glucose
Campbell's Chunky Manhattan Clam Chowder: It's the potatoes, stupid!