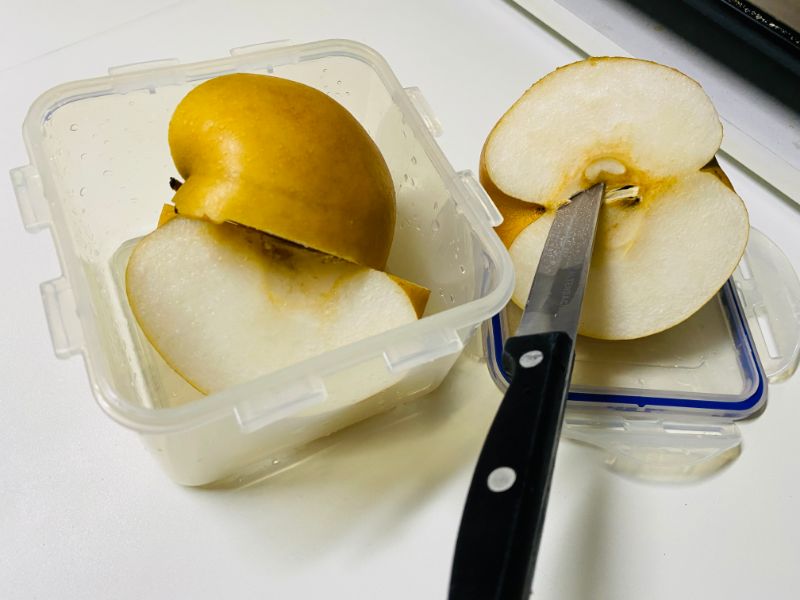 In Korea, we call this gigantic fruit a Korean pear. In other parts of the world, it might just be called an Asian pear. Or maybe a Big-Ass pear. I dunno. Everything in Korea is Korean, so I’m just gonna call it a Korean pear.

I ate half a Korean pear a while back, and the results were far from scientific. I had forgotten to check my glucose before I started eating the pear, so it’s hard to know how far I had climbed to get to 192 mg/dL. Oh, and I also had carrots and bananas! So that definitely contributed to that big glucose number.

But I didn’t make that mistake this time! So I ate this entire pear, and I was expecting the glucose hit to be pretty big. I mean, this pear weighed about 600 grams (over 1 lb.), so it’s a pretty big piece of fruit.

This reading of 106 was in the morning when I got to work.

This reading was about an hour after finishing my huge Korean pear.

But Korean pears are delicious! If you’ve never had one, you’re really missing out. They’re crunchy and juicy like apples, but without all that sweetness.

So, given these results, I think I’m going to be limiting myself to HALF a Korean pear when I eat these things. Half a Korean pear is still quite a bit of pear! But the blood sugar hit should be much more bearable.

P.S. If you do start eating Korean pears, you might like them better without the skin, which can be a little tough. I eat the skin because I’m just far too lazy to be peeling that shit off.

I knew this sub sandwich wasn't gonna do me any favors!
Aww! Just look at this cute widdle egg tart
Let’s eat chocolate, Part 2: Korean Moon Pie, a.k.a. Choco Pie, plus a bonus Workout Test (which fai...
Diabetes blood sugar before and after: Japanese/Korean food (tuna sashimi 참치회)
Sorry, but tamales are not bueno for diabetes 🙁
Bell peppers revisited - turns out they won't kill you after all!

Tags: Blood sugar before and afterfoods that are safe for diabeticsfruitKorean pear