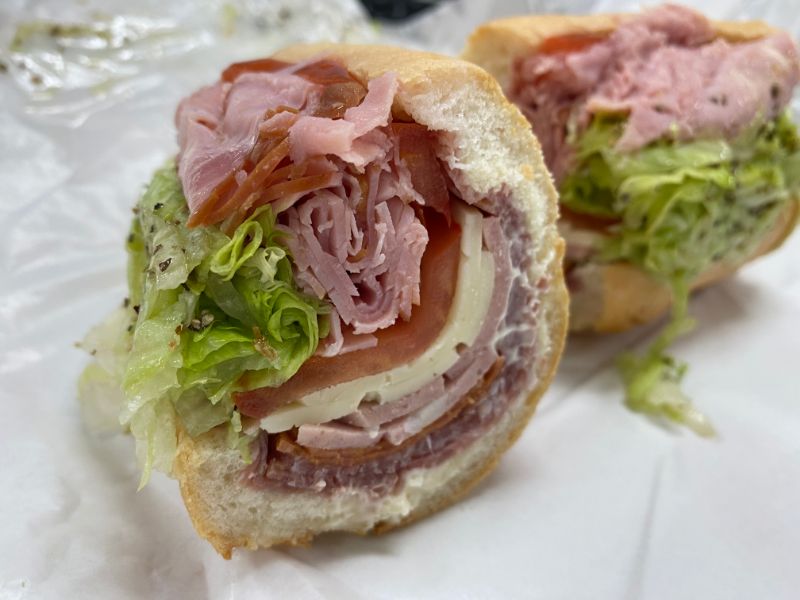 You know what? Sometimes you just want what you want.

And at a recent “team lunch” at work, the team was ordering sub sandwiches.

Spoiler alert: I wanted it!

Obviously, not all sub sandwiches are created equal. After all, Subway sandwiches claim to be sub sandwiches, much like how Taco Bell claims to be Mexican food (I’m sorry Taco Bell, I still love you!).

But compared to this sub I had at work, Subway is straight trash. Same with Quiznos, which we’ll get into at a later date.

This Team Lunch sub sandwich was in another tier … way above the tier of shitty-but-somehow-edible sandwiches that are Subway and Quiznos.

This 8-inch sandwich was from a place here in Korea called Fatboy. I forget exactly what I ordered, but suffice it to say that it was chock full o’ salami and ham and all that jazz.

I would compare it to Jimmy John’s in the USA, if you know what that is. Their commercials are somewhat amusing.

So we already know that Subway sucks if you have goddam diabetes, and let’s not kid ourselves: There’s no reason to believe that a “premium” sub is going to be any better. Bread is bread, and even “whole wheat” (notice the quotation marks) is rarely what it claims to be.

All right, let’s see what the damage was on this little treat that I allowed myself!

This reading of 117 was at lunchtime. No Diabex/Metformin yet, and it was several hours after my customary desk breakfast of (probably) cucumber spears and cherry tomatoes.

This reading was about an hour after finishing my Fatboy sub sandwich.

But here’s the thing … I kind of knew this was gonna happen! I certainly wasn’t expecting this sandwich to be diabetes-friendly. But, at the same time, I felt pretty confident that it wouldn’t murder me like those bell peppers almost did way back when.

Is there a moral to this story? Hmm. Kind of?

If there’s any lesson to be learned from stupid me eating this stupid sandwich it would be this:

We’re all human. We all want to eat shit we shouldn’t eat, and that goes for non-diabetics as well.

My opinion is that risks are best taken when your blood sugar is relatively low AND you have a reasonable expectation that the risk won’t kill your stupid ass.

In this case, my starting blood sugar was 117. That’s not super low, but for this particular risk, it’s low enough.

And I had a reasonable expectation that this sandwich wouldn’t put me in a coma. I was about to eat some bread and meat, not an entire birthday cake.

But since I’m not a doctor and will never be one, please DON’T try this at home! Or at the very least, don’t try it until your doctor informs you of whatever risks might be especially dangerous for you.

I’m not advocating that you adopt a lifestyle of pulling crazy glucose stunts. All I’m really saying is that I think it’s OK to “live a little,” but keep that living within safe boundaries and common sense! Or you might just stop living. 🙂

Diabetes blood sugar before and after: Korean food (grilled pork belly 삼겹살)
Diabetes blood sugar before and after: spicy Korean pork with vegetables (제육)
Are strawberries safe for diabetics? Well ... yeah! Turns out they are
Aww! Just look at this cute widdle egg tart
Diabetes + KFC = No problemo!
If you have diabetes, this is probably why Campbell's Chunky Soups are really bad for you

Tags: Blood sugar before and afterfoods that are bad for diabeticssandwichesSubway sandwich