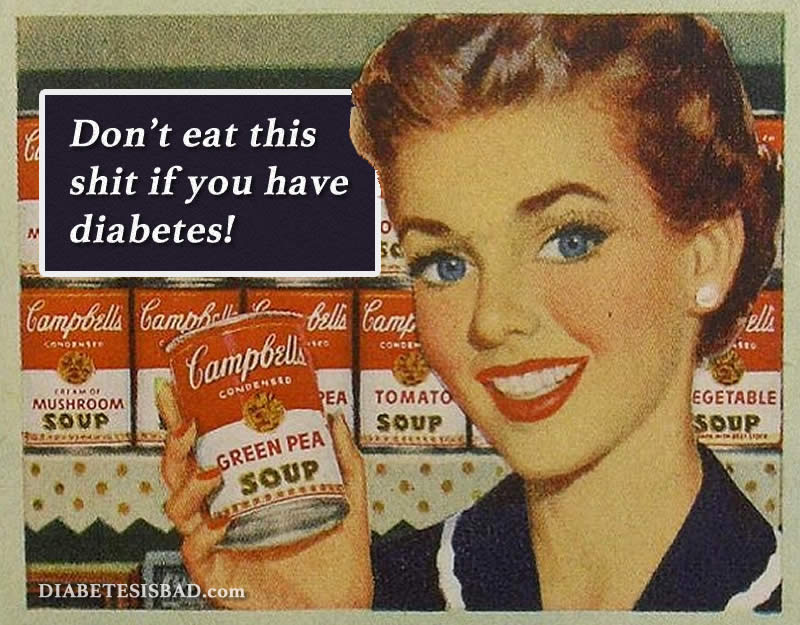 I wrote a thing recently about Campbell’s soup and how it’s mostly bad for diabetes. Campbell’s has tons of different varieties of soups ranging from condensed to “Chunky” to “Homestyle” to “Healthy Request” (which is just “low” sodium) and probably a dozen others. Naturally, that begs the question of whether it’s really just a few Campbell’s soups that are unsafe for diabetics or if the problem is bigger than that.

First, I’d like to say that I actually LOVE Campbell’s soup. Before I got goddam diabetes, I literally used to buy cans of Chunky New England Clam Chowder by the dozen.

I also used to stockpile Condensed Chicken Noodle Soup because I liked it as a hangover remedy! I ate two cans at a time. Shit, maybe that’s why I’m diabetic.

Anyway, the point is that I’m not “out to get” Campbell’s. I like eating their various soups, and in a way, I’m actually trying to convince myself that some of their soups are OK for diabetics to eat.

The only nutrition info numbers that I personally care about are carbohydrates and sugars, so that’s mainly what I’m going to focus on here.

Also, Campbell’s soups are notorious for being loaded with crazy amounts of sodium, so I will include that as a %DV figure just for fun.

The % Daily Value (DV) tells you how much a nutrient in a serving of food contributes to a daily diet. 2,000 calories a day is used for general nutrition advice.

That’s straight from the can. So if a can of soup contains 95% Daily Value of sodium (not an exaggeration!), that’s very, very bad. You’re not supposed to get an entire day’s worth of salt from eating one thing.

Below is a somewhat random sampling of a whole bunch of Campbell’s soups of different varieties. There are different tables for Chunky, Condensed, Healthy Request, and Homestyle. The Homestyle table is brief because I guess Campbell’s only makes a few of them.

The main factor that guided which soups I included here is how much I wish I could eat them without dying. Some are included based on my assumption that they’re probably really popular.

All of the values below are “per container.” That means the whole can, not “one serving” which we all know is bullshit. For condensed soups, I multiplied the nutrition info by 2 or 2.5, depending on how many “servings” are in that little can.

What do all these numbers mean?

For reference, consider the following:

Also, I recently ate HALF a can of Chicken Corn Chowder, which contains an enormous 47g carbs and 7g sugars. The result? 104 → 171. That’s an increase of 67 from ONE HALF OF A CAN OF SOUP! That’s probably about the size of a “cup of soup” you might get as an appetizer at a restaurant. Eating the whole can would have been very bad.

Holy shit. Campbell’s soup is, for the most part, really bad for diabetics!! And how does a can of tomato soup manage to have 50g carbs AND 30g of sugar??

It looks to me like there are only a few soups that won’t murder you immediately, and they’re all around 20g carbs or less. Incidentally, they’re also all condensed, including Healthy Request® Chicken Noodle Soup.

As for Campbell’s Chunky Soup … BAD BAD BAD! If you have goddam diabetes, I strongly suggest you either limit yourself to half a can at a time, or you should just stay far, far away.

And obviously, if sodium is a big concern for you, never eat Campbell’s soup again for as long as you live! The lowest sodium %DVs are in the 30s, which still sounds like way too much.

Tags: Campbell's soupfoods that are bad for diabetics