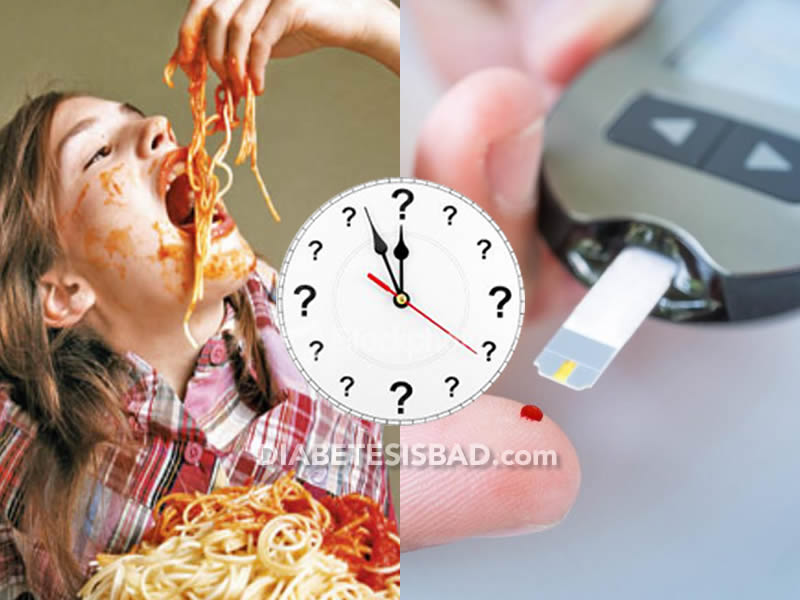 First of all, apologies for this disgusting picture of the kid eating spaghetti like a barnyard animal. I thought it was funny. But on second glance, it’s also kinda gross.

So … comments! Most comment sections online are a total dumpster fire.

But on this diabetes blog, the comments that people leave are awesome. They tell me if what I’m writing is at all helpful or if it’s just hot garbage. And sometimes people ask really great questions.

A swell gal named Susan just left this comment on a thing I wrote about KFC:

I just [noticed] you are testing 1 hour after a meal , I was told 2 hours is the best time to test.

Oh crap. Is someone finally calling me out on my bullshit?

Not at all! Susan is just raising a great point. On basically all of my blood glucose tests, I check the blood sugar 1 hour after eating.

But wait! The internet says to wait 2 hours. So what gives?

Well, the internet says a lot of things. And if you look closely, even the most “reputable” sources of diabetic and medical info do a piss poor job of explaining why you should wait 2 hours. More on that later.

First, I want to explain why I do what I do.

My reasons for checking glucose only 1 hour after eating

Ehh that might be a slight exaggeration … but really, the main reason I wait 1 hour is because a lot of my tests are of small things that aren’t really a “meal.”

I may be testing something as small as a piece of Halloween candy. Or maybe a shitty granola bar. Or a single tamale.

And the best way to get what I would consider to be “accurate” glucose results from these tests is to do them when I’m fasting. As in empty stomach. As in I’m probably already hungry before doing the test.

And whenever I do a glucose test for this blog, I don’t eat anything until after checking the glucose results, even if I’m testing something really small.

So waiting only 1 hour before I can eat again is a practical matter of me not wanting to starve to death. Waiting an extra hour beyond that would be torture.

Reason #2: I want to be consistent in my methods

I can’t very well say that eating a McDonald’s Big Mac is safer than eating a Burger King Whopper if I give the Big Mac an extra hour before checking the glucose results (which, I’m sure, would still be horrifying).

That extra hour for the Big Mac would be a really unfair “advantage” and would nullify any comparison I might try to make against the Whopper.

In order to compare various foods against each other, even in broadly relative terms, the wait time needs to be more or less the same all the time.

Reason #3: Most of the time, my glucose is already coming back down well before the 2 hour mark

It’s true that, quite often, I check my blood sugar after 1 hour and that’s it. No further tests.

But sometimes I decide to do additional tests after an additional 15, 20, or 30 minutes. And when I do this, my glucose is usually beginning to decrease already.

It happened when I ate this huge burrito. And again when I ate a gluten-free chocolate tart. And that time when I made that awesome homemade Egg McMuffin. And when I ate an apple.

But that’s not always the case. Sometimes, my blood sugar continues to climb after the 1 hour mark, like when I went crazy and ate a pile of potato chips.

Also, let’s be clear about one very important point: The goal of my tests is to see how HIGH my glucose is rising as a result of eating this or that.

Since there is no way to know when I reach that high point, I just go with 1 hour. For me, that seems like it’s usually enough time to figure out approximately how bad (or not bad!) something is.

So this is what goes on with MY body, which is to say that you might get entirely different results. If you’re a Type 2 like me, maybe your insulin-resistant blood is more of an asshole than mine.

The only way to really find out is to do your own tests!

As for the internet’s claims that you should wait 2 hours after eating before you check the glucose, I did some googling. See what they say below and draw your own conclusions.

The Mayo Clinic: When to test your blood sugar

Your doctor will let you know how often to check your blood sugar levels. The frequency of testing usually depends on the type of diabetes you have and your treatment plan.

Source: Mayo Clinic | Blood sugar testing: Why, when and how

Oh really, Mayo Clinic? My doctor will let me know?

What they DON’T say is how long to wait after eating before you whip out the glucose meter.

Kaiser Permanente: How your meals affect your blood sugar

If you want to know how your meals affect your blood sugar, testing about 2 hours after eating can be helpful.

OK, now we’re getting somewhere. This is moving in the direction of what we want to know. They say 2 hours, but they don’t say why! They just say it can be “helpful.”

Once again, this is pretty useless. But hold up, Kaiser goes on …

Uhh, alrighty then. 1 to 2 hours. Earlier on the same page, they said 2 hours.

So the folks at Kaiser can’t seem to make up their minds, but at least they give a ballpark of how long to wait if you’re looking to see how food is affecting your glucose.

Btw, in case you don’t know, Kaiser Permanente is one of the major healthcare systems in California and probably elsewhere in the U.S. They have all the money in the world, a billion doctors at their disposal, and this is the best they can come up with?

Post-prandial is a fancy term for “after meal” testing. They could stick to plain English … but you know those crazy Brits!

Post-prandial blood glucose measurements are commonly taken two hours after you have eaten.

Yawn. That’s nice, dear. Why 2 hours? Nevermind. You don’t have an answer, and apparently neither does anyone else.

Your post-prandial blood glucose levels will largely be influenced by the meal you have eaten, the type and dose of medication you take and how sensitive your body is to insulin. Most people with diabetes can expect to see a rise in blood glucose levels for their after meal results.

First of all, LOL.

“Most people with diabetes can expect to see a rise in blood glucose levels for their after meal results.” No shit, Sherlock. Thanks for the update.

But at least this website provides a goal for the 2-hour glucose check, even if they don’t give a solid reason for why 2 hours is better than 1 hour.

And if you’re questioning the credibility of Diabetes.co.uk, which is totally reasonable, it seems like their credibility is mainly based on the corporation that owns the website.

Diabetes.co.uk is part of a larger entity called Diabetes Digital Media Ltd., a company that apparently has a whole Medical Advisory Board that is stocked with people whose names begin with “Dr.”

They also have various medical advisors on staff. They appear to be pretty legit even though it doesn’t look like they’re associated with a big hospital or professional medical organization.

This is the kind of website that, on the surface, doesn’t seem to have any credibility in the medical field at all! But they do have a “Wellness Advisory Board” that includes a number of MDs and PhDs.

Anyway, I’m citing an article of theirs that was written by some lady who is not a doctor and peer-reviewed by another who is a doctor. So here’s what they say:

Testing too soon after you’ve had a meal or a snack will give you results that are probably too high. The solution for better diabetes control: Test fasting blood sugar, and test every time before you eat. Wait two hours after eating to get the best reading.

Here is yet another source that says to wait 2 hours after eating before you check your glucose.

But here’s the best part!

“Wait two hours after eating to get the best reading.”

The BEST reading? When it comes to goddam diabetes and glucose numbers, “best” generally means “lowest.” But I don’t think that’s what they’re saying.

I’m gonna assume that by “best” they mean the result that most accurately reflects what effect a meal has had on your blood sugar.

That is what I have to ASSUME. Because they didn’t say that specifically. Why? Who the f**k knows.

All right, so there you have it! Four different sources, three of which recommend testing glucose 2 hours after you eat, and one (Mayo Clinic) that punts the issue to your doctor.

Not one of them gives a reason why it’s 2 hours instead of 1 hour, or 90 minutes, or 1 hour and 46 minutes. They just seem content to go with 2 hours.

But if you read all of my nonsense at the start of this post, you already know why I personally wait only 1 hour.

If you plan to do your own food tests, which I highly recommend, the best advice I can give would be to try and be consistent in your methods.

Pay attention to when you’re taking your medication(s) and/or insulin. Test before you eat. Don’t eat anything else until you do the “post-prandial” (after meal) glucose test. And definitely take note of shit that belongs on your own personal No Eat list!

You may very well conclude that waiting 2 hours is best for you. And if that’s the case, then that’s what you should stick with.